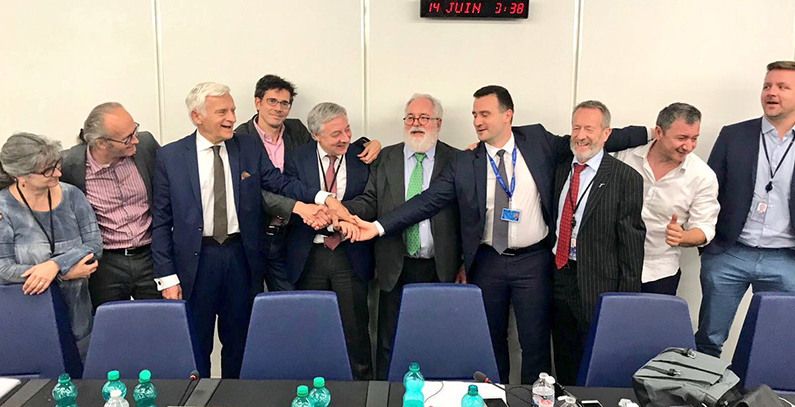 A binding EU target of 32% of final energy consumption from renewables by 2030 with an upwards revision clause by 2023 was reached between negotiators from the Parliament, Commission, and Council.

New targets and rules were also agreed for self-consumption, biofuels, and the heating and cooling sector.

The European Commission had proposed a target of 27%, while a group of EU countries backed a higher goal. The current EU target is a 20% share of renewables until 2020.

The negotiators decided to implement the “energy-efficiency first” principle, meaning prioritizing, in all energy planning, policy, and investment decisions, measures to make energy demand and supply more efficient, the European Parliament (EP) said in a statement.

A minimum share of at least 14% of fuel for transport purposes must come from renewable sources by 2030, the EP’s press release reads, adding that first-generation biofuel, based on food crops, must be limited at the 2020 levels and in no case exceed 7% of final consumption of road and rail transport. The share of advanced biofuels and biogas must be at least 1% in 2025 and at least 3.5% in 2030.

A sub-target of an indicative 1.3% yearly increase of renewables in heating and cooling installations, calculated for a period of 5 years starting from 2021, was also agreed.

Member states must ensure that information on energy performance and the share of renewables in their district heating and cooling systems is provided to final consumers in an accessible manner, the EP’s statement reads.

Upping the game: EU agrees to increase renewable energy target for 2030 to 32%, including a review clause by 2023 for an upward revision. https://t.co/2Ya6Xpqwtk #CleanEnergyEU #ParisAgreement pic.twitter.com/9u9KdcJpPP

Just enough or too little?

The European Commission said in a statement that the deal means that two out of the 8 legislative proposals in the Clean Energy for All Europeans package have been already agreed by the co-legislators.

“This deal is a hard-won victory in our efforts to unlock the true potential of Europe’s clean energy transition”, Commissioner for Climate Action and Energy Miguel Arias Cañete said.

“I am particularly pleased with the new European target of 32%. The binding nature of the target will also provide additional certainty to the investors,” he noted.

Former Green Party MP for Germany Hans-Josef Fell, who has often been coined the ‘father’ of Germany’s green energy movement, has slammed the new EU renewable energy target as ‘not ambitious enough’.

“This means that the EU will still be highly polluted and require yet more expensive fossil fuel and nuclear energy to cover 68% of its energy demand by 2030. This is in spite of the latest dramatic increase of climate disasters and weather extremes,” Fell told Impact4All, adding that the EU is extremely slow and keeps protecting its fossil and nuclear businesses.