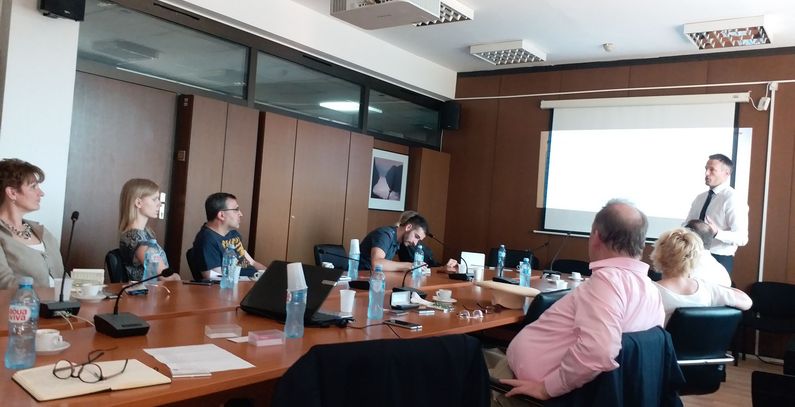 Carbon pricing – forcing electrical generators to pay for the right to emit carbon – is coming to Serbia, sometime in the period 2020 – 2025, as Serbia joins the EU. This will inevitably increase the price of electricity made from coal, and will give an incentive for Serbia to produce more of its power from renewables.

This is one of the takeaways from the workshop dedicated to EU Emissions Trading System (EU ETS), and implications for Serbia, organized by venture capital group PostScriptum and the Association for Sustainable Development (ASOR) on the premises of the Ministry of the Environmental Protection. The leading lecturer was Tom Lord, Head of Trading and Risk Management at Redshaw Advisors, an award winning carbon risk management and procurement firm based in London.

“Carbon prices are forecast to spiral higher in the coming years as the European Commission takes steps to address the over-supply in the market. Coupled with falling free allocations this will lead to compliance costs far in excess of those experienced by installations in the EU ETS to date,” Tom Lord, Head of Trading and Risk Management at Redshaw Advisors, said.

In the previous years, companies in the EU did not pay too much attention to the EU ETS. They were considering it a tax, which was paid at the end of the year by buying as much emissions allowances as they needed. This was the situation when the CO2 price was EUR 5 per tonne, but now it is up to EUR 15, and everything has changed dramatically. The general consensus is that carbon is heading higher, and that price forecasts will range from EUR 25 to EUR 35 until 2030.

The cost of CO2 emissions for public power company Elektroprivreda Srbije (EPS), with the allowances price of EUR 15, would range from EUR 400 million to EUR 450 million per year.

“EPS’ plants could operate only 17% of the time”

Should Serbia join the EU, it would automatically be included in the EU ETS. Bulgaria and Romania joined the EU on January 1, 2007 and went straight into the EU ETS. There is no Member State opt-out mechanism, it was said during the workshop.

“In what they call the ‘BREF’ phase of the EU’s scheme for regulating thermal power plants, the restrictions on pollutants will become much tougher than they are today. Plants in Serbia will probably never be able to comply fully with the BREF requirements, even with big new investments, so some of the Serbian plants will be changed into ‘peak power’ plants that only operate 17% of the time,” said Mark Crandall, Chairman of venture capital group PostScriptum, adding that this means Serbia will need new power plants, and “they are most likely to be renewable power as it is the least expensive now.”

Power plants have three choices – to close, retrofit abatement technology, and apply for a derogation from IED.

Most polluting plants are currently using a Transitional National Plan (TNP), as one of the derogation models, which will last until July 2020. There is no possibility to use TNP again when tighter restrictions are imposed. As a result, more than half the EU coal and lignite power plants exceed sulphur and/or nitrogen oxide limits.

Energy Aspects’ has projected closure of 27% of Northwest Europe power plants, 86% in Central Europe, 69% in Southern Europe, and 56% overall in Europe.

Since the beginning of Phase III power generators have received no free allocation, but there is an option to derogate this rule for certain Member States. To qualify, a Member State must meet one of the prescribed conditions. Eight Member States chose to use derogation under Article 10c to grant free allowances to their power sectors: Bulgaria, Cyprus, the Czech Republic, Estonia, Hungary, Lithuania, Poland, and Romania.

In return for free allowances Member States must draw up a plan to modernize power generation sector, and diversify energy mix. Derogation allocations will continue in Phase IV, but with stricter rules.

In order to help Member States to modernize power sector, the EU will establish a Modernization Fund to support investments in renewable generation, energy efficiency, energy storage, and energy networks. To qualify a Member State must have GDP per capita below 60% of the EU average in 2013, but this is one of the main ‘sticking’ points in Phase IV reforms.