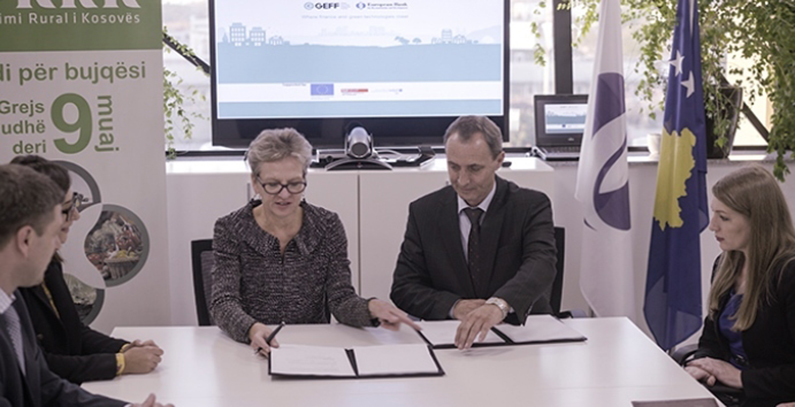 The European Bank for Reconstruction and Development (EBRD) has provided EUR 2 million loan for energy efficiency measures in residential sector in Kosovo*. The loan has been provided to Kreditimi Rural i Kosoves (KrK), the third-largest microfinance institution in Kosovo, to support households’ efforts to save energy and money.

The funds will be on-lent to borrowers from the residential sector for investments in technologies which help to reduce energy intensity and improve energy efficiency in accordance with the EBRD Green Economy Transition (GET) approach, the EBRD said in a statement.

“With these investments households will not only become more energy efficient but will also decrease their greenhouse gas emissions, reducing their impact on the environment,” the statement said.

“With KrK our efforts to support green investments will achieve a much wider outreach thanks to our partner’s strong track record and capacity for green projects. This is particularly important as energy efficiency and energy savings are crucial for Kosovo’s further sustainable growth and development,” Charlotte Ruhe, the EBRD Managing Director Central and South Eastern Europe said.

KrK was established in 2000 and provides finance to low-income individuals in rural and urban areas of Kosovo*, prioritizing the agricultural sector but also servicing other economic activities with a network of 22 branches throughout the entire territory of the country.

Luigi Brusa, Head of Cooperation Section at EU Office in Kosovo* highlighted the importance of  energy efficiency investments in helping Kosovo* to implement its national plan for energy efficiency as required by the Energy Community Treaty.

“Sustainable energy development is a top priority of the European policy. Increasing energy efficiency, reducing the reliance on imported energy sources, while increasing the use of renewable energy are the key objectives introduced in the Energy Community of South East Europe, including Kosovo*,”  he added.

The EU has provided substantial assistance for revitalizing Kosovo*’s electricity sector. Over EUR 20 million was spent on increasing energy efficiency, while EUR 10 million is earmarked for supporting the upcoming Energy Efficiency Fund.

During 2011-15 the EU joined forces with the EBRD in implementing the Kosovo* Sustainable Energy Project (KOSEP) through a blending mechanism of a EUR 3 million EU grant and EBRD financing of EUR 12 million. The purpose of the project was to implement energy efficiency and renewable energy investments in small and medium-sized enterprises and household sectors.