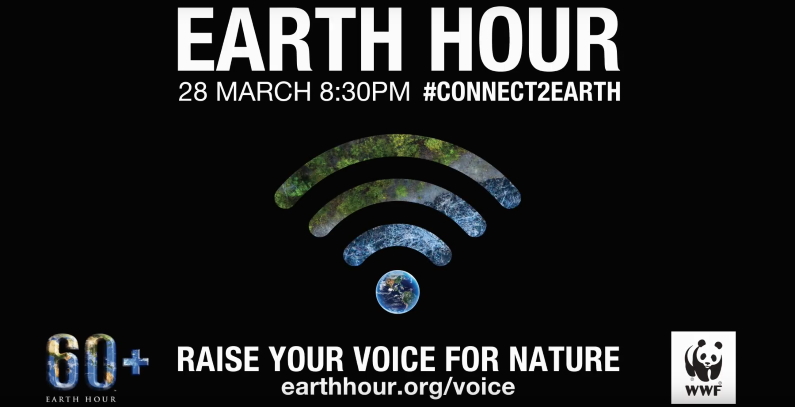 The annual Earth Hour event is on Saturday evening but without any gatherings due to the coronavirus outbreak. Earth Hour 2020 will be held on March 28 at 20:30 with a message to decision makers to put nature first.

Like every year since 2007, lights are about to be turned off for Earth Hour at homes, in public spaces and institutions to send a message of commitment to the planet. The World Wide Fund for Nature – WWF scheduled the global event for Saturday, March 28, at 20:30 local time.

This time people will be brought together only virtually, as the coronavirus crisis has ruled out any gatherings, organizers said and asked the participants to stay at home. They also warned biodiversity is under unseen pressure and that as much as one million species are at risk of extinction.

Services provided by nature are estimated at USD 125 trillion a year – double the world’s gross domestic product, said WWF International’s Director General Marco Lambertini. “Without nature’s resources, the businesses and services we depend on will fail. Nature also benefits us by providing our food, water and clean air, and is one of our strongest allies against climate change.”

The Earth Hour received support from United Nations Secretary-General Antonio Guterres, President of Austria Alexander Van der Bellen and other officials, but also artists and celebrities. Thirteen years ago it started in Sydney.

The movement promotes recycling and reuse and a decrease in purchases while choosing nature-friendly items and services. Consumers are encouraged to pressure companies to adjust their business policies. For instance, to make sure deforestation is avoided. Support for the people to launch local initiatives and participate in them is among the messages in the runup to the 2020 event.

At the same time, everyone can leave their name at the Voice for the Planet online petition and call their friends to do the same. WWF said decision makers would take heed if the support to prioritize nature is widespread. The signatures will be presented to world leaders, including at the United Nations General Assembly, it added.

Pandemic linked to disruption of nature

China has temporarily banned the sale of wild animals due to assumptions that the said disease, also known as COVID-19, came from that direction and began to be transmitted between humans.

Deforestation, intensive animal farming, climate change and forced migration, all linked to destructive human activity, appear to have accelerated the rate of outbreaks in the last few decades.

David Attenborough, legendary activist and producer, used the occasion to point to the damage that was inflicted on biodiversity. The world as we know it doesn’t work without the variety of life, he stressed and added a less wild world is less able to provide for our needs.

“In the next few decades, we need to do something unprecedented: achieve a sustainable existence on Earth,” the environmental movement’s veteran stated. He underscored the so-called age of humans, Anthropocene, is “due to be short lived” if the total imbalance continues.

In Attenborough’s words, people and the animals that they raise account for 96% of all mammals and 70% of birds in the world. He urged action in four directions: the replacement of fossil fuels with renewables, improving food production efficiency and the reduction of meat consumption, prohibiting fishing in parts of the ocean and regulating the use of international waters, and safeguarding populations of wild species.

Mother Nature is unique and infallible.Her rules nobody can brake. The 775 odd crores of people on the surface of earth are nurture andprotecred by her.. When mankind misbehaves,she counreracts that is what we are seeing now, Saju George.