E-waste is mostly landfilled, harming environment instead of being recycled 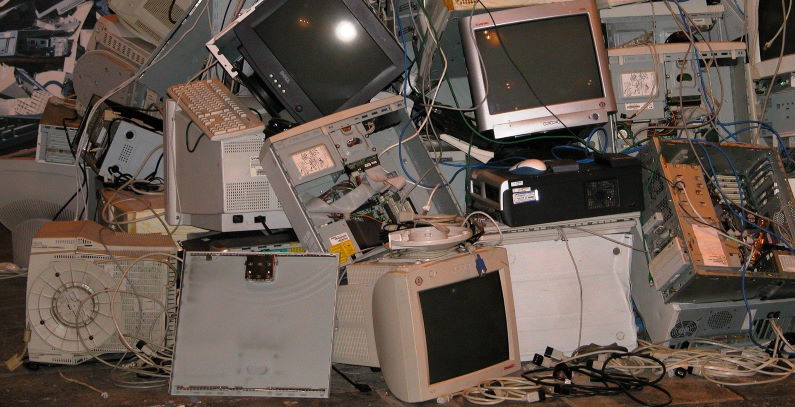 The world is far behind international targets in tracking and recycling e-waste, a comprehensive report revealed and warned of hazards for health and the environment from improperly processing and landfilling used electrical and electronic products.

The availability and widespread use of electrical and electronic equipment or EEE has led to unsustainable production models, consumption and disposal, according to the findings revealed in Global E-waste Monitor 2020. Its authors pointed to the slow adoption of collection and recycling, excessive consumption of resources, greenhouse gas emissions and the release of toxic substances during informal recycling procedures. E-waste, also known as waste electrical and electronic equipment (WEEE), is causing risks for health and the environment and landfilling and illegal shipments are among important factors.

Last year there were 78 countries with policy, legislation, or regulation in the sector, compared to 61 in 2014. The group covers 71% of the world’s population. However, the amount of waste covered in the document is rising faster than the volumes of formally recycled materials, which means challenges are getting more serious.

Relatively low collection and recycling rates are recorded even in states with a developed framework.

Electrical and electronic products have circuitry and a power or battery supply or such components. The group includes kitchen appliances, sensors, toys and tools, cameras, computers and mobile devices and gear for the production of electricity, for instance. Even clothes and furniture are now equipped with electrical components.

Toward universal approach with quality data

International institutions that participated in the research are calling for the development of recycling infrastructure and sound policies on the basis of sound e-waste data, stressing also the benefits for health and the environment. They said a global picture and common approach help to control transboundary movements and tackle illegal shipments.

The report was produced by the United Nations University (UNU) and UN Institute for Training and Research (UNITAR), the International Telecommunication Union (ITU) and International Solid Waste Association (ISWA), with contributions by the World Health Organization (WHO) and the German Ministry for Economic Cooperation and Development (BMZ) acting through the Deutsche Gesellschaft für Internationale Zusammenarbeit (GIZ).

Their initiatives are aimed at reaching the 2030 Sustainable Development Goals 11.6 – reduction of adverse per capita environmental impact of cities, 12.4 – environmentally sound management of chemicals and all waste throughout the life cycle, and 12.5 – reduction of waste generation through prevention, reduction, repair, recycling, and reuse.

In 2018, the ITU’s Plenipotentiary Conference set a target for e-waste recycling rate at 30% by 2023. It compares to just 17.4% that was documented last year as properly collected and recycled.

In 2019, the world generated 53.6 million metric tons of e-waste and 9.3 million was officially recycled. The figures grew by 9.2 million and 1.8 million metric tons, respectively, since 2014, highlighting the rising gap in absolute terms.

The volume of e-waste grew by 9.2 million metric tons since 2014 against a rise in recycled material by just 1.8 million

Furthermore, total weight of the consumed electronic and electrical equipment is now rising by 2.5 million metric tons on average every year. It is projected to hit 74.7 million in 2030.

The current annual volume of e-waste is equivalent to 7.3 kilograms per person, which illustrates the pressure on health and the environment. Europe is in the top spot in terms of e-waste generation per capita, with 16.2 kilograms, but also in the recycling rate category: 42.5%, outpacing other regions by far.

Between 7% and 20% of discarded products in the category are taken across borders, usually from richer to poorer countries for refurbishment or illegally.

“The majority of undocumented domestic and commercial e-waste is probably mixed with other waste streams, such as plastics or metal. This means that easily recyclable fractions might be recycled but often under inferior conditions without depollution and without the recovery of all valuable materials. Therefore, such recycling is not preferred,” the report reads.

Out of the 82.6% of e-waste that remains undocumented, massive amounts are taken to poorer countries and processed in improvised conditions, exposing workers and the community to toxic matter

Substances in e-waste can put people handling it in serious danger and pollute the environment. Studies examined during research highlighted adverse birth and learning outcomes, altered neurodevelopment, DNA damage, adverse cardiovascular and respiratory effects, impact on the immune system, skin diseases, hearing loss and cancer. Next in the chain is community exposure through food, water and air.