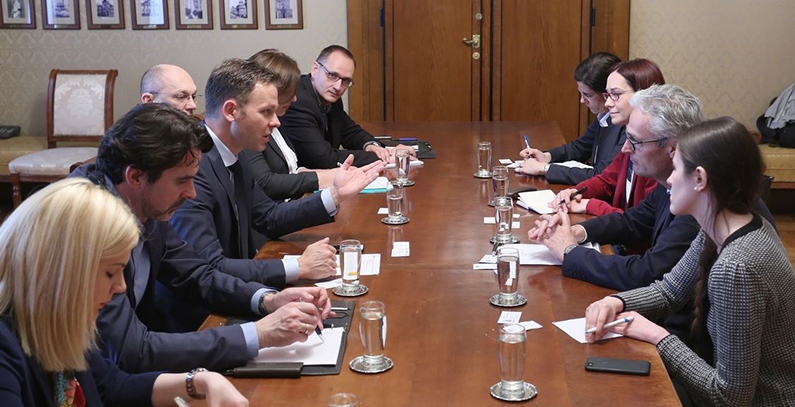 Siniša Mali, the Mayor of Belgrade, met with Harald Egerer, Head of UNEP Vienna SCC office. They discussed two initiatives that Serbian capital joined several months ago with the aim to improve energy efficiency in buildings and district heating.

During the meeting in Vienna, Mali and Egerer discussed the implementation of two UNEP’s initiatives: BEA (Building Efficiency Accelerator) and DES (Global District Energy in Cities). So far, 23 cities and regions from around the world joined BEA with Bogota (Colombia), Riga (Latvia), Porto Alegre (Brazil) and Dubai (UAE) among others. The DES initiative gathers 25 cities which include Paris (France), Tokyo (Japan) and Rotterdam (Netherlands).

Siniša Mali said that Belgrade has been carrying out many activities that are directed towards creating healthier environment. The project of refurbishing 70 facades is underway and considerable energy efficiency improvements are expected to be reached upon its completion.

According to the new Law of Housing and Building Maintenance adopted in 2016., façade maintenance is declared public interest and it is tenants’ council obligation to maintain it. In cases when tenants fail to do so, the state will do it for them, but tenants will have to pay.

Last fall, Mali announced  that Belgrade will set up an energy efficiency fund, that will be financed from the budget. However, the money from the Fund will not be granted and the citizens will have to pay it back as a kind of a loan. In this way Belgrade is to follow the steps of the city of Pirot which has already established its own fund this month.

Belgrade city government is expecting that the Fund will activate major projects for increasing energy efficiency of both public and private buildings. The city administration also reminded that the capital will organize a Belgrade Energy Week manifestation at the end of May to discuss the topics of environmental protection, climate change and energy efficiency.