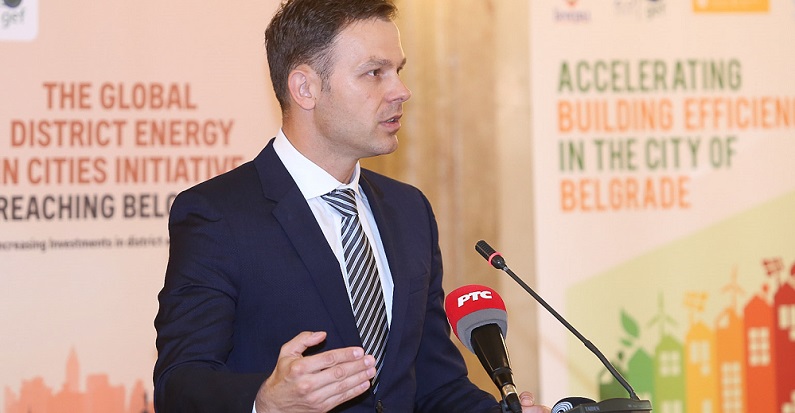 Belgrade is determined to introduce an energy efficiency fund into its budget system, where the new instrument won’t be used for grants – the approved money will be returned, which makes the endeavour unique, said Marko Stojanović, city secretary for energy.

Speaking at the kickoff meeting for the accession of Serbia’s capital to partnerships of Building Energy Efficiency Accelerator and the District Energy in Cities, he stressed there is ambition to reach savings of 1 GW in 20 years at most, compared to 3 GW of current thermal energy capacity. The segment is seen by the city authority as an energy source and it will be treated as such, while it will require a more market-based approach and more clarity in legislation, according to Stojanović.

The conference in the city hall was organized by the United Nations Environmental Programme (UNEP) and the World Resources Institute, with the participation of the Global Environment Facility (GEF). Belgrade was given the status of a pilot project beneficiary, participating with a deeper approach and a wider, three-year spectre of activity.

Another plan for the outlined budget facility is to provide funds with the help of international financing institutions which already established cooperation with Belgrade, Stojanović stated, citing the International Finance Corporation (IFC), the KfW Development Bank of Germany, and the European Bank for Reconstruction and Development (EBRD). The local policy makers count on help from donors through corporate responsibility activity, the city secretary said and added retail banks are necessary as partners.

Belgrade mayor Siniša Mali said the city authority proposed the Law on Housing and Maintenance of Residential Buildings to be changed, in order to provide tenants in the capital city the possibility to reconstruct façades and boost energy efficiency in buildings. The schedule for the next session of the City Assembly includes the item of the development strategy of the public utility company (JKP) Beogradske elektrane, introducing many alternative energy sources, he stated. “For us to achieve the final goal several elements need to be combined into one whole, where it is the amendments to the law which contribute, alongside the strategy, to the most important project for us. Namely, to establish the energy efficiency fund. Citizens will, in this way, get the opportunity for cost-effective investment in buildings on a much longer term,” Mali added.

Sustainable Energy for All (SE4ALL) is co-chaired by outgoing United Nations secretary general Ban Ki-moon and president of the World Bank Jim Yong Kim, said researcher Ksenia Petrichenko from the Copenhagen Centre on Energy Efficiency (C2E2). The institution she represents was established by the UNEP DTU Partnership – a collaborating center of the UN Environment Programme and the Danish government. DTU is the Technical University of Denmark. Objectives set for by 2030 are to ensure access to modern energy services, to double the rate of energy efficiency improvement and to double the share of renewable energy in the global mix, she explained.

The Building Efficiency Accelerator is a network of businesses and non-governmental organizations set to cooperate with policymakers on energy efficiency in architectural engineering. The District Energy in Cities Initiative is led by UNEP. It combines efforts of city authorities, academia, technology and financiers, and it selected Serbia’s capital to receive support for three years. Modern district energy systems combine district heating, district cooling with combined heat and power, thermal storage, heat pumps and decentralised energy.