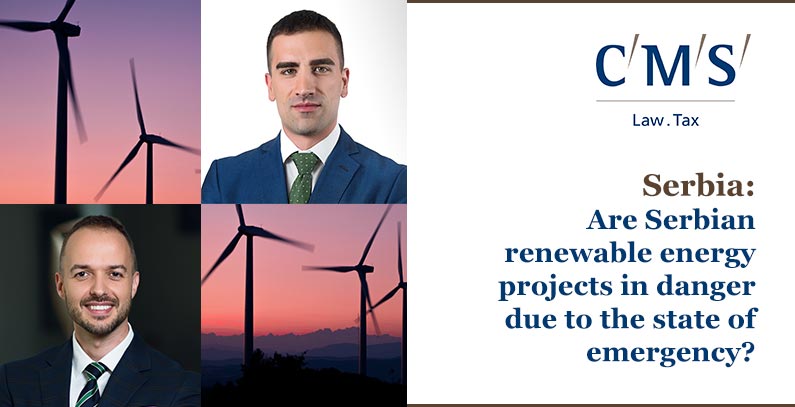 On 15 March 2020, the state of emergency was introduced in Serbia due to the COVID-19 situation, which entitles state authorities to impose a broad spectrum of short-term restrictions and different measures. What do these measures mean for the future of renewable energy projects in Serbia?

What the PPA says

Under Article 27 of the model Power Purchase Agreement for the renewables (PPA), if due to force majeure one party is unable to fulfill its obligations under the PPA, it must inform the other party accordingly.

Force majeure, under the PPA, is any unforeseeable or unavoidable event that is beyond the control of the parties and includes in particular the state of emergency, among other things.

In the event of force majeure, the PPA should remain in force, but its legal effects must be deferred during force majeure.

A party affected by force majeure will notify the other party both of the occurrence of force majeure, and the time when it is able to continue fulfilling its obligations under the PPA.

Force majeure and impossibility of performance

Should the performance of an obligation by one party in a bilateral contract become impossible due to an event not attributable to either party (e.g. due to force majeure), the other party’s obligation will cease too, while the party that performed part of its obligation can request restitution (as per Article 137 of the Serbian Obligations Act).

Impossibility of performance causes the automatic cessation of the parties’ obligations under the law (i.e. no formal termination of the agreement is required).

After the conclusion of any contract, unpredictable circumstances might emerge:

In this “changed circumstances” scenario, performance is still possible, but very difficult or the purpose of the contract is lost. In both cases, it must become evident that the contract no longer meets the expectations of the contracting parties, and that generally speaking it would be unjust to maintain its validity as it stands.

The changed circumstances as described above entitle the party having difficulties in performing its obligations to request termination of or amendments to the contract, as per Article 133 of the Serbian Obligations Act.

If, for example, the offtaker is afraid of not having regular payments of electricity, including collection of special fees for renewable energy sources (RES) electricity generation, from end consumers due to the state of emergency, does it mean that the offtaker will not be able to fulfill its obligations under the PPA? Or will this potential risk of non-liquidity only make the fulfillment of the offtaker’s obligations more difficult, but not impossible? Could the offtaker offer a lower purchase price for electricity or a moratorium to RES power producers due to the state of emergency? And if so, for how long?

In this scenario where end consumers are not paying the electricity bills in a timely manner, such non-payment, in order to be relevant, should be significant or continuing, causing unpredictable economic losses for the offtaker due to which the payment of the prices under the PPAs’ feed-in tariffs becomes onerous. Nevertheless, the risk of collection of debt under electricity bills seems predictable. Hence, any ordinary delay in bill payments should not interfere with the PPA.

However, it may be too early to raise the argument of offtaker non-liquidity, especially given that feed-in tariffs are regulated and guaranteed under the law.

On the other hand, offering a lower price to electricity producers at this moment raises questions whether this PPA would still be bankable or if the PPA would (with such reduced prices) severely alter the expectations of the RES investors and their sponsors. Given that the most important RES projects are funded through structured project financing with a clear stipulation of the financial covenants, the price cutting would likely result in the occurrence of an event of default towards lenders under the facility agreements. (Offering a moratorium during the state of emergency – giving offtaker’s authorisation to postpone payments – would make more sense in this scenario than a price reduction.)

In our view, any premature and unilateral moves by the offtaker would potentially lead to the misuse of the force majeure event that damages legal certainty and could result in massive claims and disputes initiated by RES investors, which would endanger Serbian renewable energy commitments to the EU.

For more information on this eAlert, contact your regular CMS advisor or local CMS experts Ivan Gazdic and Igor Djordjevic.