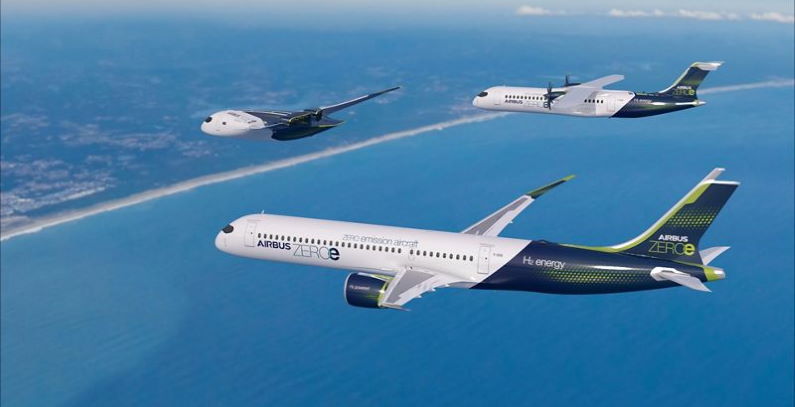 Airbus said it is leaning on hydrogen propulsion in efforts to develop the world’s first zero-emission commercial aircraft by 2035. It unveiled concepts for three airplanes that use the technology as a primary source.

The ZEROe concept enables exploring configurations and hydrogen technologies, Airbus said and expressed optimism it would lead to the development of zero-emission aircraft. The three hybrid approaches it presented lean on modified gas-turbine engines with hydrogen combustion, while hydrogen fuel cells complement the system by generating electricity.

The European airspace giant claimed the first climate neutral airplanes could enter service by 2035 and that it would need to launch the program by 2025. It estimates hydrogen has the potential to reduce aviation’s carbon dioxide emissions by up to 50%.

A full-scale aircraft prototype should arrive by the late 2020s, according to Airbus.

The transition to hydrogen as the primary power source will require decisive action from the entire aviation ecosystem, Chief Executive Officer Guillaume Faury asserted and pointed to the need for support from governments and industrial partners.

Airbus seeks partnership with governments and the industry

“Airports will require significant hydrogen transport and refueling infrastructure to meet the needs of day-to-day operations. Support from governments will be key to meet these ambitious objectives with increased funding for research and technology, digitalization and mechanisms that encourage the use of sustainable fuels and the renewal of aircraft fleets to allow airlines to retire older, less environmentally friendly aircraft earlier,” he stated.

As recently as five years ago, hydrogen propulsion wasn’t even on Airbus’s radar as a viable emission reduction technology pathway, Vice-President for zero-emission aircraft Glenn Llewellyn noted and added the disruptive potential for climate goals is “incredible.”

Liquid hydrogen is volatile and storage aboard planes is one of the biggest challenges, but Airbus has brushed off the concerns.

The turbofan engine design is for 120 to 200 passengers and a range of more than two thousand nautical miles. The liquid hydrogen will be stored and distributed via tanks located behind the rear pressure bulkhead.

The turboprop version, for up to 100 passengers, is planned for a range of over 1,000 nautical miles.

The blended-wing body airplane is envisaged for up to 200 passengers. The wings merge with the main body of the aircraft with a range similar to that of the turbofan concept. The exceptionally wide fuselage enables different options for hydrogen storage and distribution and the cabin layout.