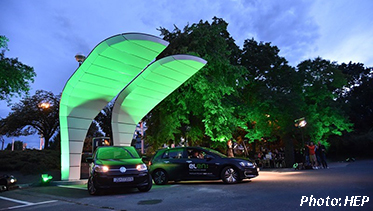 The facility is the best one in HEP’s project ELEN, within which units were installed at 21 locations in 12 cities across Croatia. The station was built on the basis of an agreement on cooperation in the pilot project to encourage the construction of infrastructure for the supply of electric vehicles with the City of Zagreb.

ELEN LEAF consists of two shelters with solar panels, an ultra-fast station to fill up batteries with 50 kW direct (DC) and 43 kW alternating current (AC) and the ability to simultaneously charge two vehicles. By using solar panels, the project will annually produce 3 MWh of electricity from solar energy, the company said.