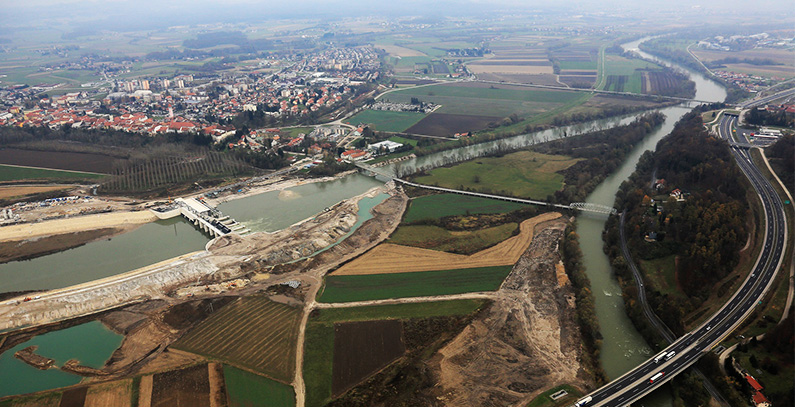 Wet tests have been successfully launched in the hydroelectric power plant (HPP) Brežice in Slovenia by charging the turbine of the first of three power generating units with the water released from the river Sava.

Testing of the equipment installed in HPP Brežice will continue until the end of the next week and the synchronization of the generator with the electrical grid is due in January, Hidroelektrarne na Spodnji Savi (HESS) reported to Hina Agency.

Construction, fitting and finishing work on the power station are under way despite unfavourable hydrological conditions which postponed testing of the installed equipment, the company reported earlier this week on its official website.

So far the work on the power plant’s control room and a facility for the personnel operating the radial gates have been completed as well as laying of machine and electrical wiring and piping. The works on the crest of spillway 2 construction were limited due to high water conditions of the Sava River.

Before the wet tests have been initiated, start-up dry testing was carried out on the first generating unit, while turbine and generator equipment is being installed in the second and third power generating units according to the schedule.

According to the HESS announcement, the charging of the reservoir up to the nominal height will be possible once the works on the reservoir embankments and the Krško Nuclear Power Plant (NEK) dam modification have been completed, which is expected to happen in the spring of 2017.

HPP Brežice with the capacity of 45 MW is the fifth of six hydroelectric power plants on the lower course of Sava River. It is the run-of-the-river and reservoir HPP, consisting of three vertical generating units with a combined rated discharge of 500 m3/s, five spillways and an average annual production output of 161 GWh.

HPP Brežice will make up roughly one percent of Slovenia’s present annual power production. This will be a peaking HPP which will open up possibilities for selling ancillary services necessary to support the transmission of electric power from seller to purchaser.

The initiative to start the procedure for the preparation of the National Spatial Plan for HPP Brežice was launched 10 years ago in 2006. Hidroelektrarne na Spodnji Savi, a Slovenian hydroelectric power company, was established in 2008 with the core mission to facilitate and promote the construction of new HPPs thus engaging in sustainable, reliable, competitive and environmentally friendly power production.

Despite the financial setbacks the company faced earlier this year, the technical inspection and start of trial operation are scheduled for the end of September 2017.