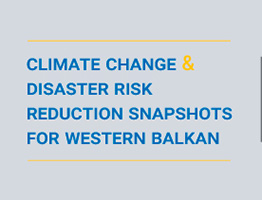 One problem of the international climate change debate is that the information presented in technical documents, such as in national communications that are submitted by parties to the United Nations Framework Convention on Climate Change (UNFCCC), is not easy to digest and their outreach to the public is often weak.

Although, or perhaps because, the climate change negotiations represent one of the most ambitious efforts of the international community of all time, the public is often lost amidst a complicated swirl of climate abbreviations like INDC, NAMAS, BURs and on and on.

These snapshots distill and visualize in small leaflets some of the most important information on how countries stand at mitigating, which sectors are vulnerable to climate change and where adaption will be needed due to predicted temperature and precipitation changes, and finally, on significant hazards, recent disasters and what we at UNDP are doing to reduce risk of disasters.

In the following, I want to explain some of the most important conclusions that can be drawn when analyzing the snapshots.

Albania, Bosnia and Herzegovina, the Former Yugoslav Republic of Macedonia, Serbia, and Montenegro submitted Intendent Nationally Determined Contributions (INDCs) prior to the climate change negotiations (COP21) that took place in Paris in December. INDCs are contributions that outline how each country is to tackle climate change such as emission reduction scenarios. Kosovo[1], which is not a party to the UNFCCC, committed own national goals to increase energy efficiency and the share of renewable energy.

INDCs are contributions that outline how each country is to tackle climate change such as emission reduction scenarios.

Among the six countries, only Albania, with 1.6 tonnes of carbon dioxide per person per year, and Montenegro, with 4.1 tonnes, lie below the global average.

Compared to the global average, Albania, Macedonia and Montenegro all show lower levels of energy intensity compared to the world average. The other countries in the region lie above world average with Kosovo being almost more than four times as much as energy intense than the global average. However, some countries such as Albania, Bosnia and Herzegovina and Kosovo show trend reversals where the absolute energy consumption between 2011 and 2012 decreased.

High degrees of energy intensity are also the reason that energy is by far the largest sector contributing to carbon emissions. For example over past years, the energy sector in Montenegro was responsible for 76.8% to 97.8% of the total CO2 emissions. On the other hand, this also means that one of the biggest opportunities to cut emissions is through a more efficient use of energy such as by insulating houses and apartments or modernizing energy intense production processes. High contributions from energy sectors to CO2 emissions is also due to the fact all countries in the region possess significant coal reserves. Domestically exploitable coal reserves often present a significant barrier to cleaner forms of electricity generation.

The region has faced severe flooding in recent years, such as Serbia’s flood in 2014 that cost over USD 2 million (EUR 1.84 million) and affected more than 1.5 million people. It is expected that a volatile and unpredictable climate will lead to many more floods similar to this in the future.

For all countries in the region, it is predicted that negative effects of climate change effects are a combination of rising temperatures and decreasing precipitation. For example, climate models predict for Bosnia and Herzegovina that until the end of the century the annual average temperate will increase between 2 °C and 4 °C with summer temperatures rising up to 4.8 °C.

Climate change is likely to increase the risk of hazards like wildfires, droughts, landslides. This on the other hand threatens important sectors such as forestry, agriculture, and water resources, ultimately jeopardizing the socio-economic and human development of the region.

For all countries in the region, it is predicted that negative effects of climate change effects are a combination of rising temperatures and decreasing precipitation.

The climate change summit in has shown that the stakes have never been higher to prevent a global catastrophe caused by climate change. The United Nations, including its climate change negotiations, is often critisized as being not effective and producing only weak results – but the UN can only be as strong and as the intentions of its member states. And the general public plays a huge role in exerting pressure on their national leaders to tackle climate change collaboratively and within the international community.

I hope that these factsheets provide a good summary and are a first step to contribute to a better understanding of climate change and disaster risk reduction of countries in the Western Balkan region.

[1] References to Kosovo shall be understood to be in the context of Security Council Resolution 1244 (1999).