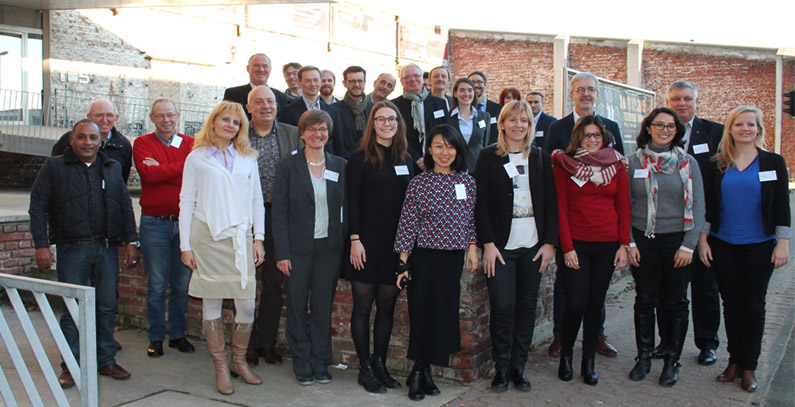 The international Connective Cities Dialogue Event “Transforming Cities: From Industrial Centers to Sustainable Urban Areas” was held in early December in the city of Bocholt, Germany. Representatives of the City of Zenica,  with the support of the GIZ ORF-EE as its partner, took an active part in this year’s event presenting its project to a global audience.

Every year Connective Cities organizes an international dialogue event serving the purpose of knowledge and best practice exchange in the area of urban development. This year the event was held from 5 to 7 December in Bocholt, Germany and featured the topic “Transforming Cities: From Industrial Centers to Sustainable Urban Areas”. Special focus was put on good practices, challenges and solutions to this global issue. The dialogue event was organized in cooperation with the German City of Bocholt.

Participants from the countries of Germany, Ukraine, Brazil, Colombia, Cuba, Bosnia and Herzegovina, Belgium, the Netherlands and China took part in the event. These included representatives of municipalities and municipal institutes, representatives from the civil society sector, the academia and the business sector, who are active in municipal projects within the given topic. The main objective of the event was to demonstrate planning and implementation of transformation projects possibilities in various local contexts. The idea was also to check the regional applicability of presented solutions and to discuss possible challenges.

In2015, the capital city of Skopje from Macedonia (FYR), as a member of the Network of the Energy Efficiency Capital Cities in South-East Europe, which was initiated by the GIZ Open Regional Fund for South-East Europe – Energy Efficiency (ORF-EE), took part in the Connective Cities Dialogue Event. This year the City of Zenica from Bosnia and Herzegovina, as another ORF-EE partner city, participated in the event. Zenica presented its project Development of the City Arena in the City of Zenica, which was entirely financed out of the City’s budget.

“The project is an urban transformation success story as it significantly improved the life quality of local citizens,” Amra Mehmedić, the Advisor for Economics and Energy Efficiency of the City of Zenica stated. She added that “post-Yugoslav Zenica is no longer known as an industrial and polluted city, having in mind its heavy industrial heritage”. The focus is more on its sports character and this arena, together with the soccer stadium Bilino Polje, which is one of the best athletic stadiums in the Western Balkans, hosting all domestic matches and FIFA/UEFA soccer training of national teams. Therefore, the revitalization and rebranding of the City of Zenica is most evident. On this occasion, Amra also stressed the importance of the cooperation between the City of Zenica and the GIZ ORF-EEwithin the areas of energy efficiency and local economic development. She concluded that „technical support and know-how transfer through various workshops ensure efficient human resource development, which in turn enhances individual and organizational performance.“

German municipalities possess huge practical experience in addressing sustainable urban development that can be mobilized for purposes of joint learning with urban stakeholders in the different regions of the world. This does not only refer to developing countries, but also to emerging economies and industrialized countries. Against this backdrop the international platform, the Community of Practice for Sustainable Urban Development CONNECTIVE CITIES has been established.

“Knowing that more than half of the world’s population now lives in towns and cities and that this trend is set to increase even further, events and platforms for learning from one another are very much appreciated. Connective Cities, as a new international network of cities for sustainable development, promotes sustainable urban development and gives municipality more opportunities to share their experience of innovative solutions.  Presentation of good practice and success stories from Skopje, last year, and from Zenica – this year, enabled knowledge and experience transfer from South-East Europe worldwide. Such successful and innovative examples should serve as models for replication of good practices,” Dubravka Bošnjak, ORF-EE Project Manager stated.

Connective Cities as a project was initiated by the Deutsche Gesellschaft für Internationale Zusammenarbeit, the Engagement Global/Service Agency Communities in One World, and the German Association of Cities (Deutscher Städtetag). It facilitates worldwide networking and exchange between urban actors from the areas of politics, administration, industry, science and civil society. It supports a systematic and application oriented exchange of experience and development of innovative ideas for urban projects. Implementation partners are selected regional and national associations of cities in Europe, America, Africa and Asia. These also include their member cities.