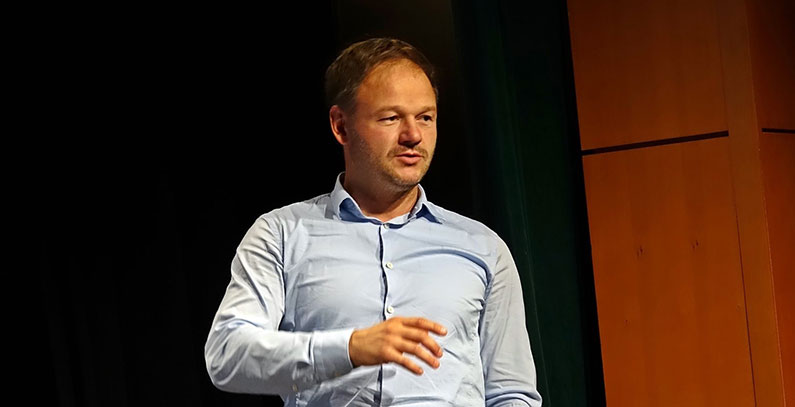 Slovenian lignite-fired thermal power plant Termoelektrarna Šoštanj (TEŠ) has been developing several projects aimed at achieving gradual energy transition thus contributing to carbon neutral society. They include the use of natural gas, the capture and utilization of CO2 (CCU), hydrogen production and the utilization of alternative fuels. In an interview with Balkan Green Energy News, Mitja Tašler, Chief Executive of TEŠ, a member of state-owned electricity producer Holding Slovenske Elektrarne (HSE Group), spoke about the projects but also advised countries in the region that are not members of the European Union on how to prepare for a possible introduction of a CO2 tax.

How do HSE and thermal power plant (TPP) Šoštanj harmonize or how they plan to harmonize their operations with the energy and climate targets of Slovenia and the European Union?

TPP Šoštanj’s business results depend to a large extent on changes in the price emission allowances, which TPP Šoštanj is obliged to buy or pay under the EU’s Emission Trading System (EU ETS) to fund the national Green Climate Fund.

HSE, TEŠ and Premogovnik Velenje are trying to actively participate in the coordination on a national level of ways and timing in the transition to a carbonless society

The high price of allowances has a significant impact on the operations of TPP Šoštanj because those expenses make a great portion of company’s overall expenses.

HSE, TPP Šoštanj and coal mine operator Premogovnik Velenje (PV) are trying to actively participate in the coordination on a national level of ways and timing in the transition to a carbon neutral society. We will need to adjust our business accordingly, and in the meantime, we will be active in identifying projects that could support us in contributing to so-called gradual transition.

Which large investments are in HSE and TPP Šoštanj’s plans for the years to come? Tell us something more about TPP Šoštanj’s intention to use solid recovered fuel – SRF.

One of the projects aimed at enabling a gradual transition to a carbon-free society is, of course, the use of gas, namely the installation of a CHP plant. It would replace the operation of Unit 5 at the Šoštanj TPP site by 2030 and completely fulfill the obligatory greenhouse gas emission reductions by 2030.

Separately, we are exploring the possibilities for CO2 capture and utilization (CCU). We are also preparing for the implementation of the so-called hydrogen project. We want to fuel local hydrogen-powered city buses, while first and foremost we are looking into alternative fuels such as biomass and SRF.

Non-hazardous waste that can’t be recycled and reused is suitable for co-incineration with the primary fuel for the production of heat and power as its calorific value is relatively high. SRF (solid recovered fuel) has such quality and we want to add it to lignite, the primary fuel, as a smaller share. SRF is defined as a solid fuel manufactured from nonhazardous waste in accordance with the guidelines of the European Committee for Standardization (CEN) Technical Committee TC 343.

Around 160,000 tons per year of alternative, SRF fuel (around 6%) can be added to the primary fuel – lignite. SRF has a higher calorific value than lignite. Coal is between nine and 11 megajoules per kilogram and SRF is 14-17 megajoules.

What is your assessment of the energy transition’s course in Slovenia?

Slovenia has been serious about energy transition, but it faces some problems at the very beginning. Slovenia is well advancing in developing new renewable energy capacities, yet, the rise of the share of renewable energy sources in final consumption is rather slow, primarily due to economic growth.

We are one of few EU countries that won’t reach 2020 targets, and we are also substantially conservative with regard to the 2030 target. We only increased it by two percentage points from the 2020 level – from 25% to 27%.

Unfortunately, the state is not at the moment sufficiently encouraging further exploitation of hydropower enough. The National Energy and Climate Plan (NECP) plans to continue with pre investment activities in the exploration of the possibilities to use renewables and it also plans to make changes in the regulations related to renewables location identification. So we hope that the next revision of NECP, in 2023-2024, will show a significantly different picture in hydropower sector. Projects in the hydropower sector may substantially contribute to increase of renewable energy share and the transition to a low carbon society.

Unfortunately, the state is currently not encouraging further exploitation of hydropower enough

As for the phaseout of domestic coal, this is a sensitive topic in Slovenia. The state made the first steps due to the intensive activities of HSE Group, and the activities are now proceeding at an accelerated pace.

Last year we managed to get involved in the EU’s Platform for Coal Regions in Transition. A workgroup has been set up at the government level to define a timetable by the end of the year for gradual coal phase out. We expect that the country will succeed in drafting a national coal exit strategy by the autumn with the help of EU funds and an external contractor.

Will the NECP affect the operations of HSE and TPP Šoštanj and how?

TEŠ’s operating plans are in line with the adopted NECP to the greatest extent, as the NECP envisages a 30% reduction in coal consumption by 2030, which is in line with our plan to stop the production in Block 5. It is not yet fully clear until when Slovenia will be allowed to use coal for the production of electricity.

TEŠ 6 is expected to be operational until 2054, but the decision will be provided by the national strategy for coal phase out.

HSE, TEŠ and PV will actively participate in the strategy preparation process to secure that this document provides a clear development and support plan for the Savinjsko-Šaleška region, the power plant, coal mine, and their employees in the coming decades. The expected result would be a fair, economically viable and socially balanced transition that would bring growth, development and job creation while providing an adequate level of security of supply for Slovenia’s energy system.

What would you advise the countries of the region that are not in the EU with regard to energy transition, the coal phase out, negotiations with the EU on targets for energy?

The fact is that EU is adopting ambitious targets including climate neutrality by 2050. EU wants to maintain competitiveness of its economy with these targets and, at the same time to use them to encourage ambitions of other countries, especially those neighboring it, by introducing a carbon tax on electricity imports from those countries.

Being aware of this, those countries should obtain detailed information about the European Commission’s plans through their participation in the Energy Community and try to adjust to new measures in such a way to provide security of supply and competitiveness of their energy sectors.

It would be good that countries from the region set up their own energy transition funds which would be funded through some kind of emissions allowances purchased by companies that emit CO2. The fund would be used to finance and support energy transition of the same companies. This approach would provide a fair transition.

We don’t know now how long would the pandemic last, but we have been preparing for it as if it would be lasting for a long time. Already in February we have launched prevention measures that were at our disposal in order to secure power production having in mind that in crisis situation electricity supply is needed more than usually.

TEŠ is ready for quarantine as well in case it becomes necessary.

Employees working in HSE and here in TEŠ, are the priority. In order to minimize the coronavirus risk everyone who can work from home does so.That is around 20% to 30% of employees. The rest must be at the location but we undertook necessary measures to minimize the risk for them also. We are also ready for quarantine in TEŠ in case the most severe measures are to be implemented.

+ 2
- 1
Thank you, your vote has been noted. You already voted for this comment.