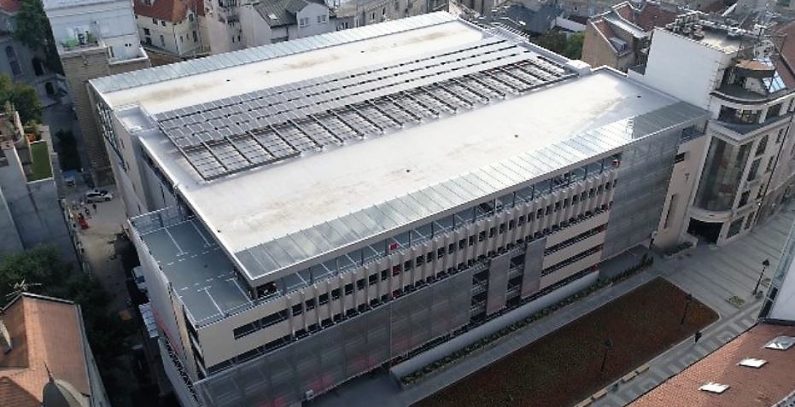 The 30 kW solar power system is under warranty until February 2, 2020, according to the text of the public invitation to bid.

The solar power system comprises 155 photovoltaic (PV) panels, 265 Wp, manufactured by Canadian Solar. The system has a smart meter device managing the inverter’s operation by reducing its power and aligning the electricity output with the garage’s demand, which secures feeding zero electricity into the grid.

The Zeleni Venac garage was built in 1978.

During reconstruction in 2015 and 2016, no works were carried out on the hydrant network.

In 2016, the facility’s facade was replaced, but the warranty period expired in December 2018, according to the tendering documentation.

Garages that not only have solar panels, but also recycle

As part of the recent reconstruction, Parking Servis installed solar power systems on the rooftops of its Obilićev Venac and Zeleni Venac garages, which now supply the facilities with electricity.

This helps reduce the time spent searching for a free parking space and consequently vehicle emissions and noise, according to the company’s website.

Since 2016, all Parking Servis facilities have also been equipped with recycling bins, which are used by both employees and customers.

Parking Servis is implementing the ISO 14001 environmental management standards. Obilićev Venac is also the first garage in Serbia to have been equipped with electric vehicle chargers, which can charge six cars simultaneously.