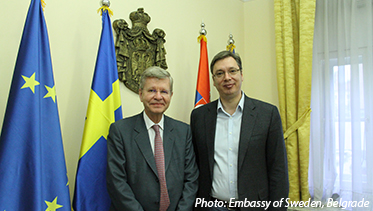 After the meeting held between Christer Asp, Ambassador of Sweden to Serbia and Aleksandar Vučić, the Prime Minister of Serbia, the Embassy of Sweden said four environmental protection agreements in the pipeline, to be implemented by Serbia’s Ministry of Agriculture and Environmental Protection, are worth EUR 9.5 million.

Ambassador Christer Asp stated the projects, which will span four years, pave the way for the negotiations with the European Union on environmental issues. More importantly, they will improve the quality of life, he stressed. The cooperation between Serbia and Sweden in this area is key for the EU accession process, the embassy underscored. It provides better services within waste water and solid waste to people in Serbia, according to the statement. “It also helps making Serbia a cleaner place that can better attract foreign investment and tourism. Sweden and Serbia have a long history of cooperation within the environmental sector,” the embassy said.

Including other ongoing support in this sector, Swedish disbursements for the coming years are estimated to be EUR 3 million on an annual basis.

Priority Environmental Infrastructure for Development (PEID), new project preparation facility managed by the ministry, will be assisted in the development of technical documentation and permits for environmental infrastructure projects, enabling them to be financed by European Commission or other funding sources.

The fourth segment of support is for the ministry’s chemicals management department for meeting legislative requirements for EU accession, the Swedish embassy said.