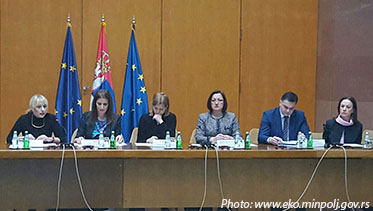 Minister of agriculture and environmental protection Snežana Bogosavljević Bošković announced the Green Fund of the Republic of Serbia will start its operations on January 1 next year as a body within the institution. Speaking at a meeting of the National Investments Committee, she presented the progress made in the implementation of investments in the field of environmental protection.

Contracts are devised to be signed with end users for the projects in infrastructure within a decentralized system for managing Instrument for Pre-Accession Assistance (IPA) of the European Union, like in the case of regional waste management centre for the Subotica region and the waste water treatment facility in Raška. The framework defines obligations of local authorities, the responsible ministry and the Ministry of Finance in relation to project financing and implementation, the minister said. Several memorandums of understanding have been produced or are in the pipeline for waste management and waste water treatment projects financed by donor funds, the report adds.

The minister pointed out the Green Fund is financed from the state budget. Its purpose is the financing of the preparation, implementation and development of programmes, projects and other activities in the field of conservation, sustainable use, protection and improvement of the environment, according to the ministry’s statement. In the past ten years Serbia has conducted a number of infrastructure projects in the field of environmental protection, but because of their complexity, and with lack of capacity and a clear institutional framework, many problems have been perceived during their implementation, Bogosavljević Bošković said. The need for a clear national policy has become obvious, particularly in the area of planning the dynamics of implementation and financing of infrastructure projects in this area, she underlined.