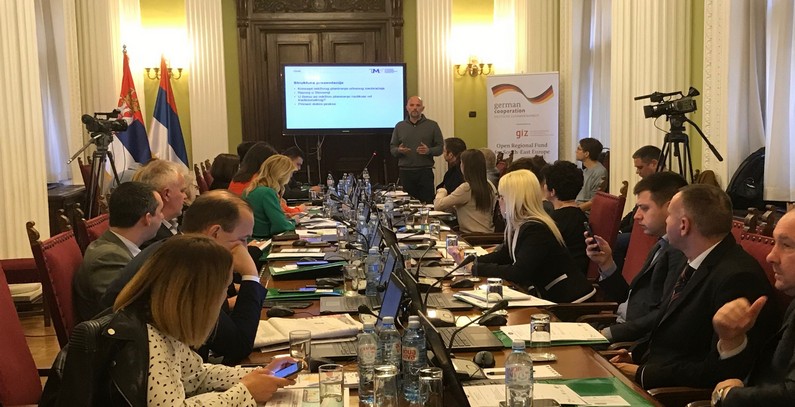 What some countries took decades to achieve in terms of sustainable urban mobility planning, Slovenia managed in only 10 years. Its capital Ljubljana is one of good practice examples presented to Serbian Members of Parliament and other stakeholders at an informative session organized by the GIZ Open Regional Fund for South-East Europe – Energy Efficiency (GIZ ORF-EE) in cooperation with the Belgrade Fund for Political Excellence (BFPE) in Belgrade.

When a proposal was made seven years ago to take a lane away from automobiles in Ljubljana and dedicate it to public transportation, the idea was seen as tantamount to “eco-terrorism.” Seven years later, the city did this along three major traffic routes, making it evident how fast perceptions and practice can change, Aljaž Plevnik of Slovenia’s Urban Planning Institute, a GIZ ORF-EE-engaged expert, told the parliamentarians.

As opposed to traditional transport planning, which focuses on which infrastructure to build, sustainable urban mobility planning, as explained by Plevnik, asks the following questions:

Sustainable urban mobility is about improving lives and health by reducing emissions and increasing mobility, which also contributes to climate protection. This is achieved by promoting the preferred SUMP modes of mobility: walking, cycling and public transportation, with private automobiles at the bottom of the list, the parliamentarians heard.

The session was held during the sitting of the Committee on Spatial Planning, Transport, Infrastructure and Telecommunications of the National Assembly of the Republic of Serbia. The sitting was attended by representatives of other institutions as well, including Đorđe Milić, Assistant Minister in the Ministry of Construction, Transport, and Infrastructure, and Dušan Rafailović, Secretary of Transport of the City of Belgrade.

Introducing the Fund’s activities, Svetlana Bačanin, GIZ ORF-EE Country Coordinator in Serbia, recalled that the GIZ ORF-EE, in cooperation with the Belgrade Fund for Political Excellence, helped introduce the topic of energy efficiency in the work of the National Assembly of the Republic of Serbia back in 2011, which led to introducing the topics of climate protection and sustainable urban mobility.

“These three topics are interconnected and represent an important field of work in terms of aligning the legislative framework with the EU acquis, which is why the GIZ ORF-EE will in May organize a visit of parliamentarians and parliamentary staff from the region to Ljubljana, an example of good practice in planning transportation in a new and modern way, in line with the sustainable urban mobility principles,” Bačanin said.

In addition to cooperating with Parliaments of the region on this topic, the GIZ ORF-EE will provide expert assistance to the City of Belgrade’s working group monitoring the drafting of the capital’s Sustainable Urban Mobility Plan (SUMP) and support the implementation of a demonstration project, said Bačanin. Also, through the Standing Conference of Towns and Municipalities (SKGO), the GIZ ORF-EE will cooperate with three more towns in Serbia – in Šabac and Pirot, it will support the drafting of SUMPs, while in Kruševac, it will finance a short-term measure envisaged under the town’s SUMP, the first to have been independently produced by a town in Serbia.

The meeting also provided an opportunity to present the Roadmap on Sustainable Urban Mobility in SEE Countries, a GIZ ORF-EE publication.

Some of the good practice examples cited at the informative session included Zurich, which has one of the world’s leading public transportation systems; Vienna, where 40% of households do not have a personal car; Munich, a leader in bicycle modal share among large German cities, of nearly 20%; and Amsterdam, likely the cycling capital of the world.

Comparing Belgrade and Zurich, Plevnik said that public transportation has a share of over 50% in the Serbian capital, compared to Zurich’s 40%. In Belgrade, however, the share is on the decline and this trend needs to be stopped to avert multiplying car numbers, said Plevnik, who also noted that parts of Belgrade are suitable for cycling and parts for electric bikes and scooters.

Answering questions by MPs, Plevnik said that all sustainable urban mobility models point to the need of subsidizing public transportation, with the share of costs covered by city budgets at 50% on average.

Poorly organized city traffic, with increasing number of cars, not only has an adverse impact on the quality of lives, but causes deaths as well. The World Health Organization’s (WHO) data for Austria, Switzerland, and France for 2003 shows that there were 7,217 deaths attributable to traffic accidents, 28,000 to transport emissions, and 42,000 to a sedentary lifestyle. 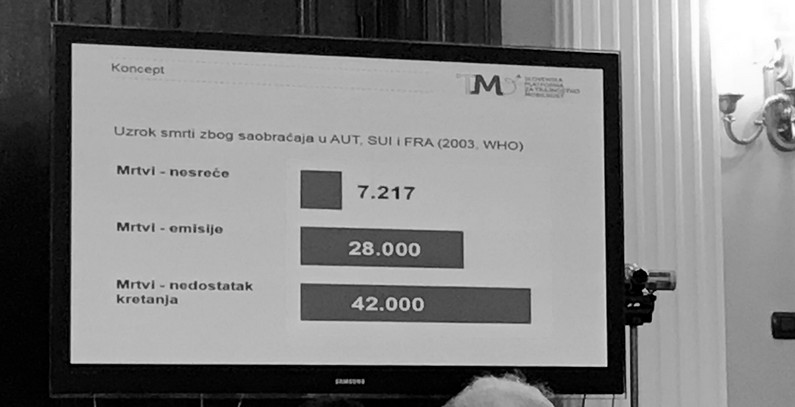 To bring the SUMP concept closer to parliamentarians, Plevnik cited a saying by Fred Kent, founder of Project for Public Spaces (PPS), a leading authority on revitalizing city spaces and one of the foremost thinkers in livability, smart growth and the future of the city: “If you plan cities for cars and traffic, you get cars and traffic. If you plan for people and places, you get people and places.”

The quote sent a powerful message and was used by Katarina Rakić, chairwoman of the Committee on Spatial Planning, Transport, Infrastructure and Telecommunications, to formulate the overriding conclusion of the meeting – that urban mobility should be planned for people, not for cars.