Siemens pressing ahead with eHighway solution to decarbonize transport sector 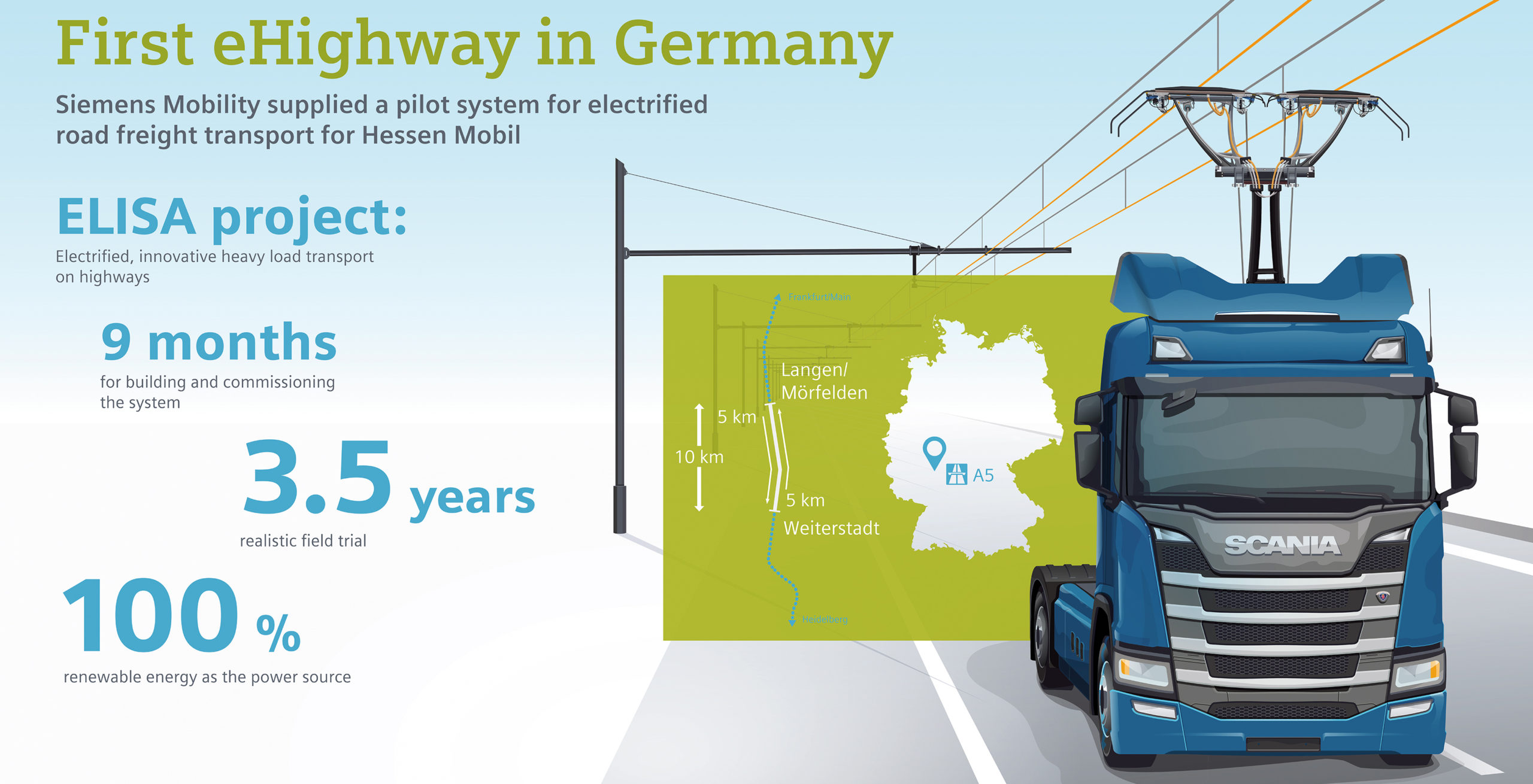 Carbon emissions from heavy-duty vehicles, including lorries, buses, and coaches, represent around 27% of total road transport CO2 emissions. While the EU has introduced new rules for manufacturers to cut CO2 emissions from new trucks by 30% from 2030, German technology powerhouse Siemens is offering a zero-emission solution: the eHighway system.

Installed, tested, demonstrated, or deployed in three countries already, Siemens’ eHighway system enables hybrid trucks to both draw power and charge batteries from overhead (OH) lines resembling those of the existing trolleybus and streetcar systems. Unlike trolleybuses and streetcars, however, hybrid trucks can leave the OH line on the highway for purposes such as overtaking other vehicles.

Drawing on the energy stored in the battery, the OH truck can continue operating electrically and emission-free until its battery is nearly depleted, when it can switch to its diesel engine, both ensuring the truck’s uninterrupted operation and reducing local air pollution.

The World Business Council for Sustainable Development (WBCSD) predicts a trebling of global freight transport volumes between the years 2000 and 2050. Despite considerable expansion of rail infrastructure, railroads will only be able to handle around a third of this additional freight traffic. The majority will therefore have to be transported on road, Siemens notes.

Experts expect CO2 emissions from road freight traffic to more than double by 2050. Innovative ideas for passenger cars already exist – now the time has come to provide an economic alternative to fossil fuels in road freight transport too, according to Siemens.

E-mobility offers a sustainable solution: The electrification of road freight transport will enable significant reductions in CO2 emissions and ensure that energy for transport will be available also in the future. The eHighway is particularly effective from an environmental and economic perspective on heavily used truck routes, e.g. between ports or industrial estates and cargo hubs, or between mines and central transshipment terminals.

The first eHighway system on a public road was inaugurated in June 2016 in Sweden. For two years, a Siemens Mobility catenary system for trucks was tested on a two-kilometer stretch of the E16 highway north of Stockholm. The system trial employed two diesel-hybrid trucks manufactured by Scania and adapted, in collaboration with Siemens Mobility, to operate with the catenary system.

During the two-year trial, Sweden’s transport authority Trafikverket and the district of Gävleborg gathered data to see whether the Siemens eHighway system is suitable for future commercial use and further expansion. As part of its climate protection strategy, Sweden has committed to having its transport sector independent of fossil fuels by 2030.

In November 2017, Siemens Mobility installed and tested a two-mile-long overhead contact line system for hybrid electric trucks near the U.S. ports of Los Angeles and Long Beach, two of the largest ports in the country.

In August 2017, Siemens Mobility was commissioned by the German state of Hesse to build an overhead contact line for electrified freight transport on a ten-kilometer stretch of autobahn. With this field trial, the eHighway is being tested on a public highway in Germany for the first time. The system is installed on the A5 autobahn between the Frankfurt Airport and the Darmstadt/Weiterstadt interchange.

In March 2018, a further contract was awarded by the Research and Development Center of the University Kiel for the construction of a five-kilometer eHighway on the A1 autobahn between the Reinfeld and Lübeck interchanges.