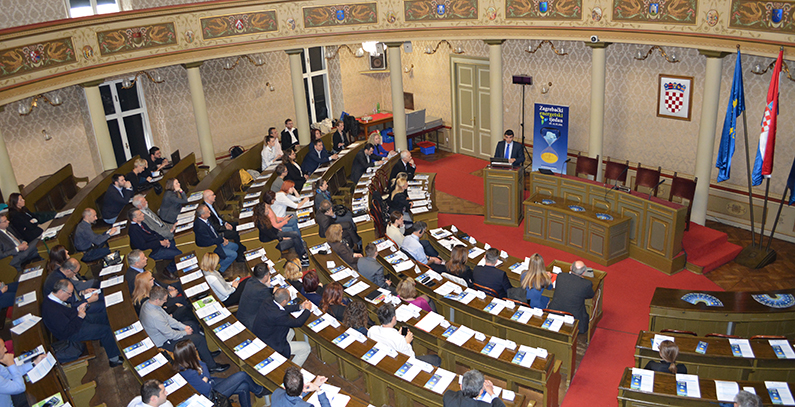 Seventh in a row, Zagreb Energy Week took place from May 9 to May 14 under the slogan „Development we don’t want to stop, but pollution we can!“

Various local and regional stakeholders took part in this event and highlighted once more the importance of energy efficiency and sustainable development.

This year’s Zagreb Energy Week placed a somewhat broader contextual focus on energy efficiency and climate protection. The week was marked by various events, such as international conferences, expert meetings, workshops, university forums, seminars, presentations and specialized classes in schools and kindergartens of the city of Zagreb, and open-door events pertaining to the topics of energy efficiency, renewable energy sources, climate change and sustainable development.

As in the previous years, the City of Zagreb collaborated with the German organization Deutsche Gesellschaft für Internationale Zusammenarbeit (GIZ) through its Open Regional Fund for South-East Europe – Energy Efficiency (ORF-EE).

As part of Zagreb Energy Week, the international conference “Towards a Sustainable Energy Union” was held on May 11 and 12. The conference covered various topics, such as how to best reach European energy targets, the challenges encountered along the way, the potential of sustainable energy projects, innovative financial instruments for European Union’s energy transition, the cooperation models of public and private sectors for sustainable development projects, and the role of local communities in the process of energy sustainable development.

Vice-president of the City Assembly of Zagreb, Jelena Pavičić Vukičević used the opportunity to welcome all participants and to remind once more of the importance of the week and the conference. She put an accent on the efforts of the city of Zagreb, stressing that the local government follows the energy policy of the EU, as well as Croatian national policy and that it is actively involved in the implementation of EU objectives, including those in the field of energy, environmental protection and sustainable development. In favor of stronger action to achieve these goals, she added, is the recent signing of the Paris Agreement on April 22 in New York, where European Union, as well as Croatia, committed to reducing carbon dioxide emissions by at least 40% by 2030.

The presenters at the conference were largely representatives of Croatian ministries, organizations and institutions active in the sector of energy. The event was also attended by representatives of the EU and important regional stakeholders who contributed to the discussion with their expertise and experience.