Roundtable on green building certification: Energy passports to be checked 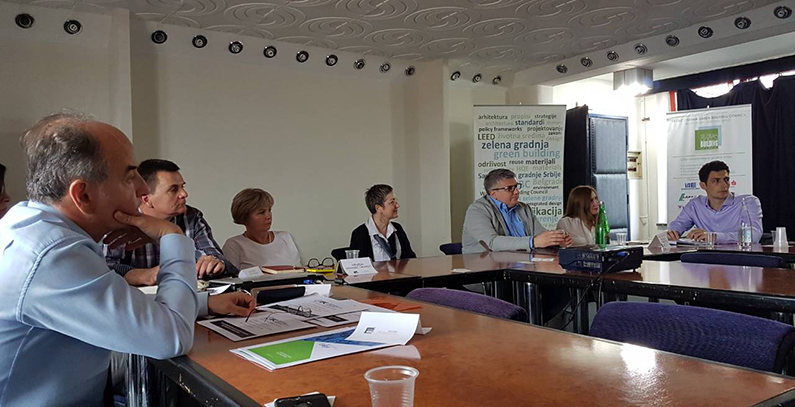 The drafting of new energy efficiency rulebooks is under way to introduce checks of mandatory energy passports for buildings, representatives of the Ministry of Construction, Transport, and Infrastructure said at a roundtable on green building certification in Serbia. The gathering was organized by the Serbia Green Building Council, whose representatives urged the state to support those certifying buildings.

“The council, as the national member of the World Green Building Council (WorldGBC), has a neutral approach to recommending certificates. The certificates most frequently obtained here are LEED and BREEAM – so far, 12 buildings have been LEED certified and one BREEAM certified, while many buildings are in the certification process,” she said.

Korica noted that 10 members of WorldGBC are preparing new net-zero certificates as the world is more and more focused on achieving zero CO2 emissions.

Obrad Topić, energy efficiency adviser at the ministry’s housing and architectural policy, utilities, and energy efficiency department, said that energy passports are a form of energy certification, noting that certificates, which were the main topic at the roundtable, are much more comprehensive when it comes to green building.

He said that the drafting of new energy efficiency rulebooks is under way, adding that the working group is cooperating with the German development organization GIZ and the European Bank for Reconstruction and Development (EBRD).

“Energy passports, which are already mandatory, will be subject to controls and will be checked from now on,” Topić said.

Korica expressed the Serbia Green Building Council’s readiness to make itself available to ministries to help more clearly define regulations in line with the principles of green and sustainable development. Green building is not a great unknown, but merely represents a different perception and approach, she said.

“I invite line ministries – of construction, energy, and environmental protection – to recognize positive steps of those implementing elements of green building, in this case, those getting building certificates, and support them with some type of benefits, in order to motivate others to follow in their footsteps. This would surely have a positive impact on the economy and the environment and help more efficiently meet obligations,” Korica said.

Conclusions: Certification is the new normal in the world, a trend in Serbia

Participants in the roundtable agreed that green building has become the new normal in the world, while it is present in Serbia through building certification, which can be said to have become a trend driving the market to green/sustainable building. They also agreed that regulations concerning green and sustainable development must become mandatory, and that all stakeholders – the state, business, and organizations such as SrbGBC – should work together towards a common goal.

Presenting the BREEAM certificate, Martin Elezović of Atrium Consulting recalled that the certificate applies indefinitely for new construction and for three years for the existing buildings.

Nenada Nenadić Tanasić discussed details of the U.S. LEED certificate, noting that the financial aspect is the key driver given that an investor raises the value of real estate through certification.

Dragan Obrenović, project manager at the International Finance Corporation (IFC), said that certification increases investment costs by 2%-3%, noting, however, that rent is higher by 5%-8% and sale prices by 5%-6% as a result of certification, which paints a clear picture about cost effectiveness.

“Unfortunately, in Serbia, the thinking ends at the level of initial cost,” he added.

Nataša Bugarinović of MPC Properties said that certification can increase construction costs by up to 10% depending on the grade, making it necessary for an investor to determine the exact objective.

For his part, Slavko Bingulac, a representative of ImmorentSingidunumErste Group, said that the reasons for certification include Erste Group’s policy of having certificates in countries of operations and the fact that major tenants require certification when renting space.