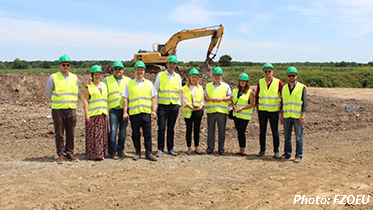 Landfill for non-hazardous waste Teodorovac is located close to family houses. The rehabilitation of the facility began, financed by the Cohesion Fund of the European Union and the Environmental Protection and Energy Efficiency Fund (FZOEU). The project is worth HRK 6.6 million (EUR 881,000). The beneficiary is the Municipality of Đurđenovac in Croatia’s east and the contractor company is Eurco d.d. from Vinkovci.

“Teodorovac” is one of 12 landfills in Croatia which are financed by the same model, for which it was provided about EUR 32 million of EU funds.

Works are aimed at the conservation of nature and the biological and landscape diversity in the village. The project will contribute to targets from the national Waste Management Strategy and the Waste Management Plan including the closure and rehabilitation of all existing landfills, FZOEU said.

Teodorovac is one of 12 such landfills financed by the same model, for which EUR 32 million of EU funds was provided. Rehabilitation has been completed at Filipovica in Osijek (EUR 748,000), Stara Ciglana in Semeljci (EUR 240,000) and Trebež in Samobor (EUR 8.7 million).