Refuse-derived fuel as an alternative to fossil fuels in Serbia 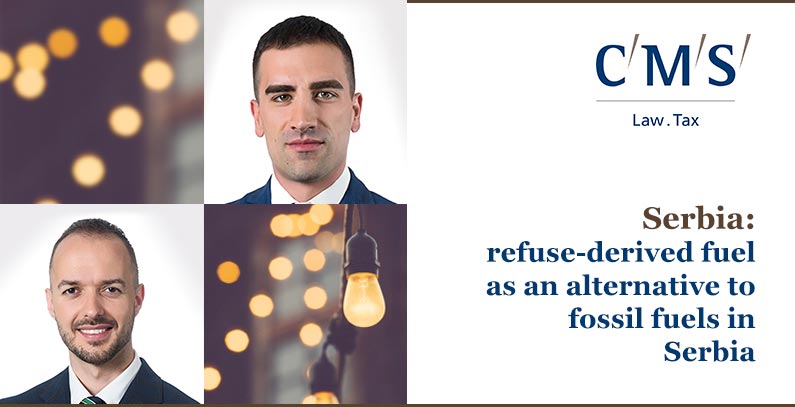 Given the increased pollution levels and large quantities of municipal solid, commercial and industrial waste being generated daily in both developed and developing countries, it is expected that various waste-to-energy processes, including recovering energy from generated waste, will likely play a key role in decreasing pollution levels, while simultaneously increasing energy efficiency in modern eco-friendly societies.

One of the alternatives to some traditional fossil fuels (such as coal) that is gaining in importance is refuse-derived fuel (“RDF”).

RDF, as an alternative fuel, stands for a wide range of waste fractions that have been processed, sorted and shredded in a specific waste treatment facility in order to achieve high calorific value. For instance, RDF typically consists of such waste materials as non-recyclable plastics, paper and cardboard, mattresses (stripped and without metal parts), waste tyres and biomass waste – for instance, unprocessed waste wood, textiles etc. RDF is sorted to separate combustible materials from non-combustible and other inadequate materials using mechanical and biological methods in specialized waste-to-energy facilities.

Thanks to these bio-mechanical processes, RDF can be extracted from many types of waste, e.g. municipal solid waste, industrial waste, commercial waste, construction waste and waste sludge etc. High calorific fractions from processed waste materials are being used both in waste-to-energy facilities and as fuel substitutes in industrial processes (e.g. cement kilns), thereby substituting a portion of non-renewable fossil fuels.

Using RDF in industrial processes is a more practical option than the mass-burning method (burning the refuse as received), as it leaves more opportunity for future recycling programmes – which is quite important, given that recycling should always have priority over energy recovery.

Taking into account what has already been said and particularly that:

potential investments in this sector are welcomed, especially in underdeveloped RDF markets like Serbia for the following reasons.

First, most applicable Serbian regulations are largely aligned with the EU acquis, especially with so-called Waste Incineration Directive no. 2000/76/EC.  Second, large potential clients, such as large cement kilns, thermal plants etc., are present locally and will probably wish to enter into long-term cooperation with potential RDF manufacturers. Finally, in Serbia there are a significant number of overloaded, problematic landfills and the country would greatly benefit from the development of waste treatment facilities.

Nevertheless, it should be acknowledged that RDF production is relatively unknown in Serbia and it is thus likely that state authorities are still not fully acquainted with the concept itself, its environmental impacts, or its benefits compared to the exclusive use of fossil and renewable fuels. Having said that, and given the success of the most recent Serbian waste-to-energy projects and the benefits that RDF brings, we truly expect that in the near future the Government will pay more attention to RDF and other ways of recovering energy from waste and find appropriate means of stimulating direct investments in this sector, thereby aligning its position with developed European countries.