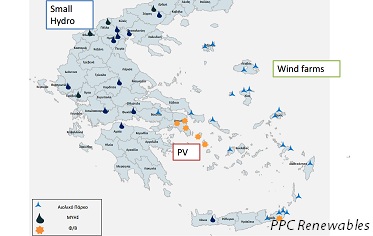 The hybrid power system in the Greek island of Ikaria is 85% finished. The 6.85 MW facility with wind turbines, pump storage reservoirs and photovoltaic units should be launched before the end of next year, said Fotis Vrotsis, chief executive of PPC Renewables SA, locally also known as Deian.

Speaking at an energy conference about the future of renewables beyond 2020, he noted the company is about to start refurbishing and modernizing equipment and wind generators at eleven sites and islands in the Aegean. The event was organized by relevant ministries of Greece and Germany in cooperation with the Hellenic-German Chamber of Commerce and Industry.

Vrotsis added PPC Renewables is researching, developing and installing geothermal energy units to tap on power production potential. In 2020 installed power could reach 170 MW with additional potential of 230 MW, he said. The company has a license to research and develop projects of an overall 120 ΜW. Sites to be auctioned by the energy ministry are estimated to have capacity of 20 ΜW, he said.

The subsidiary of the state-owned power utility takes into account the stance of local communities and the environmental, economic and local costs and benefits in the process of design and implementation of projects, according to Vrotsis. Greek and German participants were presented with interactive maps with PPC Renewables’ hydroelectric, wind and photovoltaic units, while the emphasis was on energy storage methods in non-interconnected islands.