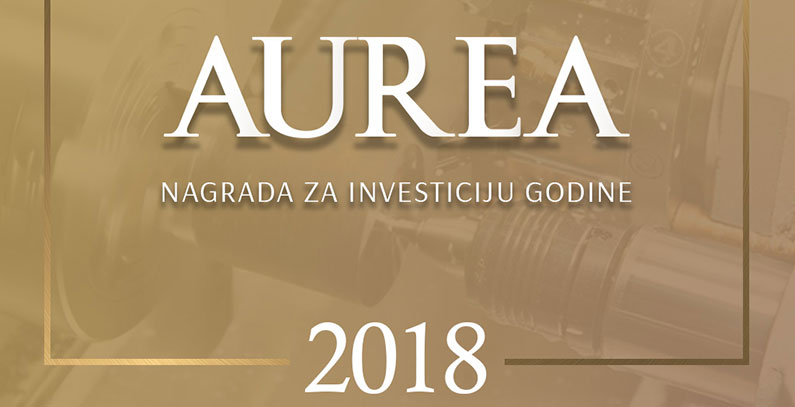 The business portal eKapija has opened the award contest for the investment of the year award Aurea 2018, to be handed out for the tenth year in a row. Traditionally, this award supports investments in innovative and successfully launched projects.

The companies which initiated or realized original and/or innovative, socially useful and financially sustainable projects in the calendar year 2017 may apply until February 27, 2018. The amount of funds invested is not the deciding factor, eKapija said in press release. Instead, projects are ranked based on the originality of the innovation implemented, the significance to the environment, as well as the potential to be successful in the market.

All industries are treated equally, as well as all kinds of projects, and the implementation of new processes and/or technologies, development or implementation of original software, offering a new product or coming up with a new approach to the market are all equally valid.

Last year, the Belgrade-based company Logit Solutions was the winner of the Aurea 2017 investment of the year award for the unique technological platform called AgriSens, performing agricultural area survey by drones or other aircraft and then processing and analyzing data, based on a variety of information techniques.

The innovation prize was given to Novi Sad-based Eton Digital, for its organic food social market OrganicNet, whereas the winner of the social usefulness award is Weiss Light, for its LED lamp factory, the first of the kind on Serbia.

Aside from the awarded investments, another five projects were in last year’s Aurea innovation of the year award finals, and four of them were related to renewable energy sources, energy efficiency and environmental protection: Petro SOLAR, an intelligent, solar-powered street furniture project was developed by Petro mont company; Elektrovat company for the best practice implementation in the construction of small HPP Beli Kamen. Hydrogen Technologies for the unique technology for de-carbonization of a combustion engine with oxygen, and OnoBikes, joined the club of the last eight in 2017 with its Archont electric bicycle.

The editorial team of eKapija has started selecting candidates for the Award 2018. Following the analysis of the sent applications, the shortlisted projects will be presented on www.ekapija.com and www.aurea.rs. The winner will be selected by an expert, impartial jury, whereas one online vote will be given by the readers and visitors of the mentioned sites, the press release reads.

In addition to the main award, two special acknowledgments – one for innovation and another for social usefulness – will be handed out as well.

The eKapija business portal organizes the Aurea awards as part of “its orientation to supporting and awarding companies which integrate innovations and care for the environment in their operations as I believe that we thereby contribute to recognizing the importance of these aspects to the sustainable development of our society”, said Zdravko Lončar, Managing Director of eKapija.

For the fourth time, eKapija’s strategic partner in the Aurea project is the insurance company Coface.

This year, Balkan Green Energy has joined eKapija as its media partner in recognizing and awarding investments in best innovative solutions and social responsibility.