Plastic – between benefit and harm 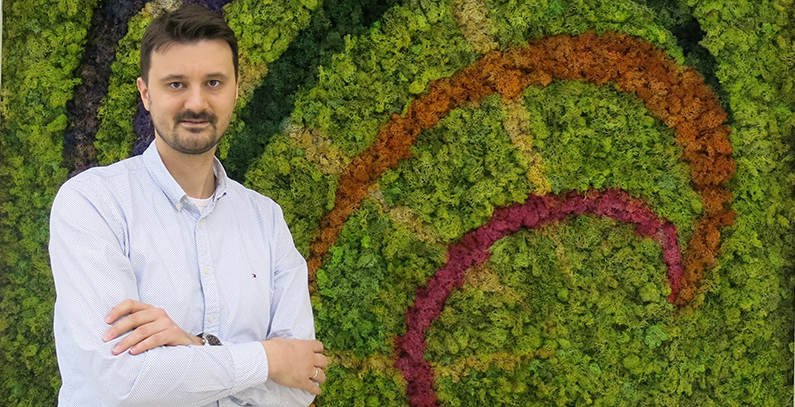 Plastic is undoubtedly one of the most significant contemporary materials. However, its overuse comes at a price.

There is no material today that is as ubiquitous in everyday life as plastic. Its widespread use in all sectors – from packaging production to construction to the automotive industry to agriculture and medicine – is due to its capability to be shaped and adapted to most diverse purposes. Malleable, durable, light in weight, and cheap, plastic is the perfect material.

However, its mass consumption comes at a certain price – the use of fossil fuels in the production process and the inadequate management of large quantities of plastic waste are among the biggest contemporary environmental challenges.

The role of plastic as one of the most significant materials in early 21st century is demonstrated by the fact that half of all plastic ever produced was made in the last 15 or so years. Globally, 8.3 billion metric tons of plastic has been produced so far, three quarters of which, or 6.3 billion tons, has already become waste.

Managing such large quantities of waste poses a great challenge. The World Economic Forum (WEF) estimates that in 2013 only 14% of plastic packaging worldwide was collected for recycling (only 2% was recycled into new plastic of the same or similar quality). A large portion (40%) of global plastic waste ends up in landfills, preventing its recycling or extended use, while as much as 32% of plastic waste ends up in the environment (rivers, seas, and oceans) without any control.

When China shuts its doors to waste

In the 1990s, China was a suitable market for the profitable use of plastic in the production of new goods for sale or export. For countries exporting plastic waste, that meant an opportunity to dispose of such waste and prevent it from ending up in landfills or incinerators.

However, the fragility of global dependence on a single importing country started to show in 2010, when China began imposing more stringent requirements on waste imports, requiring significantly less contamination. This peaked in 2017, when a new Chinese import policy permanently banned the import of nonindustrial plastic waste (in 2016 alone China imported half of all plastic waste intended for recycling – of 14.1 million metric tons of plastic waste exported by 123 countries, China took in 7.35 million tons, from 43 countries).

This situation has complicated the problem of plastic waste being accumulated in exporting countries, forcing many of them to seek to implement circular economy principles, as well as improve their recycling capacities.

Since its production is based on fossil fuels and additives (pigments, stabilizers, etc.), and due to the inadequate plastic waste management, plastic poses one of the biggest threats to the environment and human health in the 21st century.

According to the best estimates, 150 million metric tons of plastic waste has been accumulated in the oceans to date, 23 million tons of which is made up of various chemicals and toxins that are added to plastic as performance enhancing additives. It is estimated that without appropriate action, there will be more plastic in the oceans than fish by 2050.

Marine animals ingest large quantities of plastic, which causes suffocation or injuries. When it comes to the impact of plastic on human health, a study conducted by the University of Newcastle, Australia, suggests that on average people ingest approximately 5 grams of plastic every week, which is the equivalent weight of a credit card.

Moreover, the renowned Serbian geneticist Miodrag Stojković has recently announced that he and his international team have completed a two-year study of the effects of plastic on early human development. The conclusion of what is likely the first serious study of the harmful effects of plastics on humans is that plastic nanoparticles affect fertility, embryo implantation, the development of the eye, lungs, and heart valves, and cardiovascular diseases.

When it comes to climate change and the impact of the plastics production sector, it is necessary to highlight that emissions of harmful gases come from the production itself, as well as from the incineration of plastics in the waste-to-energy process. If the current trend of plastic consumption continues, emissions from this sector could reach almost 15% of the world’s total projected carbon budget for keeping global warming within the Paris Agreement limits.

Plastic management in the European Union

Plastic has a significant role in Europe. According to the 2018 annual report by Plastics Europe, a plastic producers association, Europe accounts for 18.5% of global plastic production (64 million metric tons), making it the world’s second largest producer, right after Asia, whose share in the global output is as high as 50.1%.

The plastics sector also has an important economic role. According to the association’s report, the sector in Europe employs about 1.5 million people in some 60,000 companies, which together generate an annual turnover of EUR 350 billion.

Faced with the threats posed by the mass production of plastics and the waste it generates, the EU has adopted a number of directives and action plans over the past ten years aimed at protecting the environment. An overview of the key measures (directly or indirectly related to plastic waste) is given in the table below: 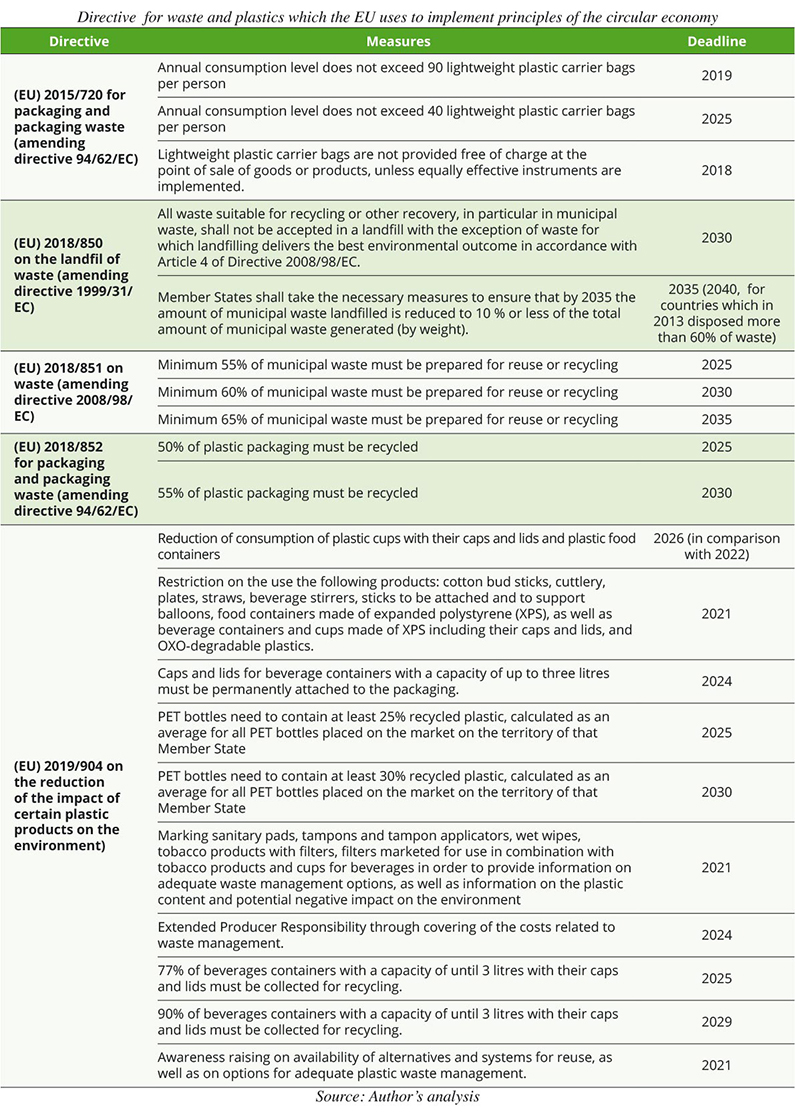 Dear Willem, thank you for carefully reading the article. Indeed, it is left 25% by mistake, correct percentage is to be 30%. The editor will make correction accordingly. Best, Danko