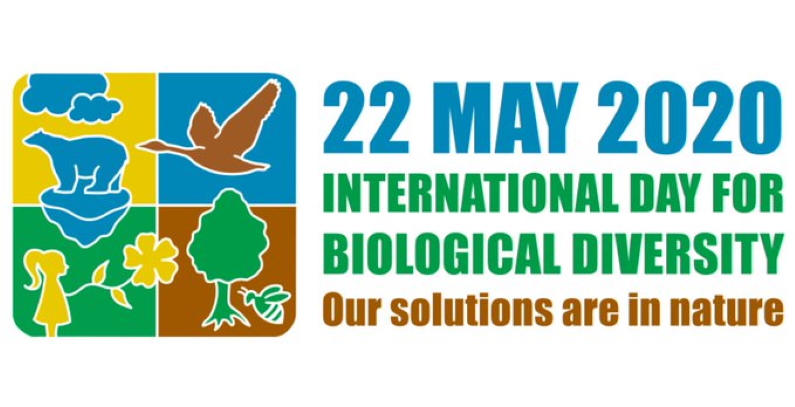 The slogan for the International Day for Biological Diversity 2020 is “Our solutions are in nature” and it will be marked only online. The emphasis is on human health and how much it depends on biodiversity, with increasing evidence that imbalances in ecosystems increase the risk of diseases like the one caused by the coronavirus.

The United Nations has highlighted the fundamental role of nature in ensuring people’s health and good nutrition on the occasion of last year’s International Day for Biological Diversity. In the meantime, human society suffered a sudden and long-lasting change with the onset of the COVID-19 pandemic. Despite all our technological advances we are completely dependent on healthy and vibrant ecosystems for our health, water, food, medicines, clothes, fuel, shelter and energy, just to name a few, the Secretariat of the Convention of Biological Diversity or CBD said and announced this year’s activities under the slogan “Our solutions are in nature.”

It decided to launch its first-ever online-only campaign to lower the risk of coronavirus contagion and called on those interested to participate in awareness-raising campaigns in their countries.

The world’s biodiversity day will be marked on May 22 though some states opted for a variety of events within the International Biodiversity Week. Ireland asked those who are out exercising to make photographs or videos of any dragonflies or damselflies that they see. Jamaica focused on the presentation of conservation projects but also included a virtual art exhibition. Elsewhere around the planet, enthusiasts are sharing how they use local plants or they participate in science-based games.

A quarter of all species could soon be extinct

As we know a quarter of all species could soon be extinct, the danger for our health from the loss of biodiversity is clear.

Biodiversity provides so many benefits.

Aside from the massive risk for the people’s livelihoods and basic means of survival, the disruption of the nature’s balance weakens our defenses against the spillover of animal viruses to humans. COVID-19, HIV and SARS are examples of zoonotic epidemics, as they are called, that likely erupted with hunting and trade in wild animals.

In fact, more than 70% of all emerging diseases affecting people have originated in wildlife and domesticated animals, a group of scientists recently wrote in an article for the Intergovernmental Science-Policy Platform on Biodiversity and Ecosystem Services (IPBES). Pandemics, however, are caused by activities that bring increasing numbers of people into direct contact and often conflict with the animals that carry these pathogens, they said.

“We should adopt a ‘one health’ approach at all levels of decision making – from the global to the most local – recognizing the complex interconnections among the health of people, animals, plants and our shared environment. Forestry departments, for example, usually set policy related to deforestation, and profits accrue largely to the private sector – but it is public health systems and local communities that often pay the price of resulting disease outbreaks,” the authors added and pointed to long-term costs and effects.

“The rampant destruction of nature and unsustainable utilization of its components have created a pathway for some of the emerging global crisis such as massive landslides and floods, loss of fertile soils, habitat loss that trigger animal-human interactions/conflict leading to cases of zoonotic diseases becoming more frequent,” said Keriako Tobiko, Kenya’s Cabinet Secretary for the Ministry of Environment and Forestry.

Two fifths of the market of goods and services are sustained by biodiversity, but there are additional intangible benefits

He noted at least two fifths of the market of goods and services are sustained by biodiversity. The top environment official stressed some benefits are intangible, like spiritual and aesthetic values and the support for knowledge systems and education.

There is still time to listen

IPBES has said a million species are in danger of disappearing and that a potential cascade of accelerating extinctions could irreversibly alter life, said Ivonne Higuero, Secretary General of the Convention on International Trade in Endangered Species of Wild Fauna and Flora – CITES.

“Don’t give up hope. There still is time to listen to the urgent calls of nature. There is time still to gear our work towards imagining and enacting bold, transformative policies to halt biodiversity loss and pave the way towards a sustainable future,” she stated and warned of unsustainable economic activity and the destruction of ecosystems.

The International Day for Biological Diversity has been observed since 1993. The date was changed in 2000 to May 22.

A wildfire in early April in the region tracked by Balkan Green Energy News was a troublesome reminder of the effects of human recklessness. Some of the five local incidents in the Fruška gora mountain in Serbia caused serious damage to the habitat of numerous extremely rare species. Among them are orchids from the genus Ophrys, spiders, grasshoppers and birds.

The fires ravaged through 42 hectares and investigators determined they were all caused by people. The largest one seems to have been set deliberately, according to the authorities.

Fires in a mountain in Serbia have destroyed habitats of very rare orchids, birds, spiders and grasshoppers

On an international level, activists from Green Home, Ozon, the Center for Environment and the Aarhus Center Sarajevo have filed a complaint with the Espoo Convention Implementation Committee because Bosnia and Herzegovina didn’t carry out a transboundary environmental impact assessment for a series of dams. They are planned to be built for four hydropower plants on the river Drina near the border with Montenegro. The largest of the facilities, Buk Bijela, is projected for the capacity of 93 MW.

On the flipside there are human efforts to help nature heal. The Montenegro Biology Student Association and youth environmentalist group called Zeleni centar have finished last month the first phase of a project to protect a type of eel in Lake Skadar that is endangered on a global scale.