Photo: Ministry of Energy, Commerce and Industry of Cyprus 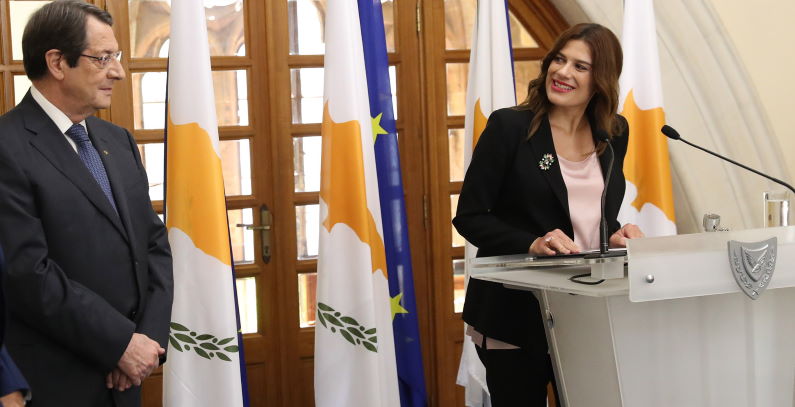 New Minister of Energy, Commerce and Industry Natasa Pilides is assuming the position on July 10. She said Cyprus needs to be established on the Mediterranean’s energy map and stressed the importance of environmental issues.

President of Cyprus Nicos Anastasiades swore in Natasa Pilides as the Minister of Energy, Commerce and Industry. After serving as deputy shipping minister, the third female member of the Council of Ministers in Nicosia will be taking over her new duties on July 10. They are “complicated and demanding with multiple and multifaceted responsibilities and challenges,” she said.

Pilides said the ministry would work on establishing Cyprus on the Mediterranean’s energy map as well as on environmental issues, among other priorities.

Anastasiades praised her scientific background and “highly successful career for a number of years in the various positions” she has served, together with her “ethos, skills and consistency.” The president noted the total share of renewable sources in the energy mix doubled to 14% between 2013 and 2018, compared to the national target of 13% for 2020.

Over 16,500 households benefited from support measures for the installation of solar panels since 2013, President Nicos Anastasiades says

With the completion of all licensed green energy projects, the measure will exceed 20%, he stressed. Anastasiades pointed to “significant savings” in electricity costs for more than 16,500 households in Cyprus thanks to state support that was launched in 2013 for the installation of photovoltaic systems.

The island country’s leader said the opening of the electricity market would be completed next year “despite difficulties.”

Natasa Pilides is replacing Giorgos Lakkotrypis, who has stepped down after over seven years in the position.