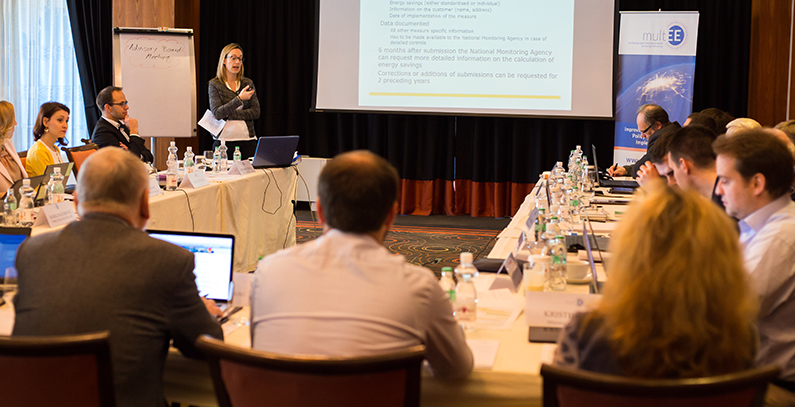 The third Partner and second Advisory Board meetings within the project Facilitating Multi-level Governance for Energy Efficiency (multEE), were held in Sarajevo on April 14 and 15. The gathering included a consortium of multEE project partners from EU and non-EU countries.

Both, EU countries and the non-EU countries of Albania, Bosnia and Herzegovina, Kosovo, Montenegro, Macedonia and Serbia, as members of the Energy Community (EnC), have committed themselves to fullfilling the EU 20-20-20 energy savings and climate protection targets. Furthermore, they are obliged to transpose EU acquis in the energy and climate protection areas into their national legislation. Energy efficiency policy formulation, in most of these countries, usually falls under the responsibility of national governments, whereas, implementation is mainly done on the local and regional levels. However, communication and information exchange between different administrative levels is weak or often non-existant. Local and regional levels are not actively involved in policy formulation and design of support programs and policy plans. Moreso, national, regional and local levels are, in general, not sufficiently harmonized. The aim of the multEE project is, thus, to improve vertical coordination mechanisms and information flow between different state levels on the planning and implementation of energy efficiency policies, based on an exchange of experiences and knowledge between old, new and EU candidate countries.

In this context, after the first year of project implementation, the focus of the Sarajevo meetings was on the exchange on project achievements so far. Furthermore, the accent was on survey results on good practices for Monitoring and Verification Schemes and Coordination Mechanisms in the EU 28 + FYR Macedonia, as well as on recommendations to policymakers.

Tania Molteni, guest speaker from collaborative project COOPENERGY and researcher at Bocconi University in Italy, used the opportunty to stress the importance of multi-level governance for sustainable development. She presented a user guide on Multi-Level-Governance adressing the coordination between the regional and local levels, created with the aim of developing sustainable energy concepts. The importance of multi-level governance subject was many times reiterated by participants of the Advisory Board meeting, held on the second day.

Applying the concept of multi-level governance in the energy field is still relatively new, especially for the countries in Southeast Europe, where a top-down approach of policy formulation and pursuit of technical solutions, rather than an inclusive approach and capacity development, dominate, Benjamin Struss, Coordinator of the multEE project stated at the meeting. “However, when true progress in transforming our energy systems is at stake, we need all levels of government on board. Hence, we need to especially empower local and regional actors to implement the ambitious targets the national governments have committed themselves to fulfilling,” he underscored.

The multEE project is implemented as part of the Open Regional Fund for South-East Europe – Energy Efficiency (ORF-EE) project of the Deutsche Gesellschaft für Internationale Zusammenarbeit (GIZ). It is co-financed under the EU Horizon 2020 research and innovation programme.