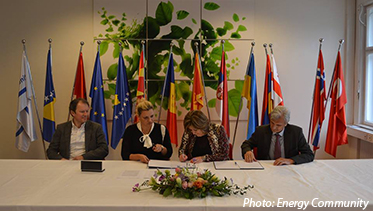 Representatives of transmission system operators (TSOs), national regulatory authorities, and ministries of energy and power exchanges of six countries of the Western Balkans declared commitment to implement general principles of cooperation as well as concrete actions to develop the regional electricity market. The memorandum of understanding was signed at the premises of the Energy Community Secretariat in Vienna by representatives of Albania, Bosnia and Herzegovina, Kosovo, Macedonia, Montenegro and Serbia.

The signatories agreed to implement day-ahead market integration with the aim of achieving coupling of national day-ahead markets with at least one neighbouring country of the group or a member of the European Union by July 2018. Also facilitated were commitments for cross-border balancing cooperation between the six countries by December 2018.

The document will facilitate the implementation of the regional electricity market objectives agreed upon by the energy ministers in August and will improve the coordination between the Western Balkans 6 (WB6) in order to create a competitive, efficient and integrated European energy market, Energy Community said.

“In terms of having all the necessary preconditions in place for a regional electricity market, we are not there yet as our WB6 monitoring work has shown. However, today’s memorandum of understanding certainly brings us closer to reaching the WB6 commitments agreed at the Western Balkans 6 Summit in Vienna last year. I am thrilled that we were able to bring together all the direct stakeholders… under one umbrella agreement,” according to Janez Kopač, director of the Energy Community Secretariat.

Integrating power markets is an important step in delivering more social and economic welfare to all customers, commented Konstantin Staschus, secretary general of the European Network of Transmission System Operators for Electricity (Entso-E). “Transmission system operators will continue working hard towards the goal of creating a regional electricity market in the Western Balkans in a consistent and coordinated manner with the work already undertaken within the European Union, and of integrating it with the overall European internal electricity market. As in many other processes, TSOs support policymakers and regulators, and in this instance of the Energy Community, in building power bridges between countries,” he added.

The signature of the memorandum by Kosovo’s representatives is pending the entry into force of the connection agreement between KOSTT and relevant members of Entso-E, the statement said.