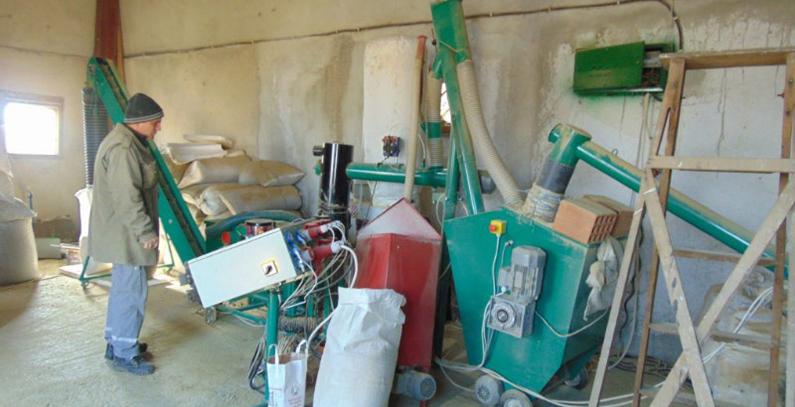 Farmers will be able to calculate through specially developed software whether it pays off for them to use straw pellets for their own heating, or it would be better for them to just turn their excess straw into pellets and sell them to others.

Three of the environmental problems of rural Macedonia – burning of excess straw in open spaces, high heating costs in winter, and air pollution – could be solved with one single project. The Macedonian Scientific Society from Bitola works on developing a system in the nearby municipality of Mogla for turning the unused straw into pellets that could later be used for heating the households. The municipal authorities are partners in this project that is supported by the European Union with EUR 150,000.

A pellet producing machine was installed in the municipal building of Mogila last October, and the production of pellets began in November.

Mayor Stevo Pivkovski, announcing the end of  trial season, said that he expects a 60 percent cut of the heating costs next year. For now, straw pellet heating is used for the municipal building and a school in the nearby village of Beranci, but the plans are for such systems to be installed in other schools and public buildings, as well as in private companies.

Marija Dimova, the project coordinator from the MSS said that the savings in the initial year were 40 percent because the production started too late, so electricity was used to heat the room with the pellet producing installation. Therefore, for the next season they plan to begin production in August.

“Large quantities of unused straw are being burned in the fields, and it can be used for heating instead. We developed software that would help farmers calculate whether it pays off for them to use their own straw for heating their homes, or it would be better to just turn it to pellets and sell them to others. We’re still waiting for results, but there’s a lot of potential. This project is not aimed to remain only in Mogila. If it works here successfully, it will expand to other rural areas of the country”, Dimova explains.

The villages of Mogila municipality are only 10 to 15 kilometers away from REK Bitola, the country’s largest coal power plant and the region’s biggest polluter. While municipal authorities cannot influence the pollution from the plant, they’re trying different ways to cut emissions from other sources.

Two thirds of the country depends on wood

With over 60 percent of the households using firewood for heating, according to national statistics, pellet heating is gaining momentum in recent years. People are looking for ways to cut their heating costs, or at least to get better comfort for the same money. Local authorities, on the other hand, are trying to use this trend for tackling the heavy air pollution problem.

In the capital city of Skopje, household heating is responsible for 32 percent of the air pollution. For Cvetanka Ikonomova, head of the city’s environmental department, pellet heating offers a simple solution to the problem.

“People burn everything in their wood stoves, plastic, excess motor oil, tires, pieces of furniture, materials containing glue and toxic substances, and that’s what makes the household heating such a big problem. In the pellet stoves, they wouldn’t be able to use anything else but pellets. And they’re less polluting than firewood in the first place”, Ikonomova says.

But with pellet stove prices from EUR 600 to over EUR 2,000, the affordability of this type of alternative heating remains a concern. This is why, for the second year in a row, the city provides subsidies for people to replace their wood stoves with ones that burn pellets. Up to 70 percent of the costs are covered, but the total amount of subsidies per person cannot exceed EUR 500. This year 290 residents of Skopje applied and got subsidies, 100 more than last year. The project cost the city EUR 162,000.

Antonio Jovanovski, head of the Go Green NGO, doesn’t expect significant positive effects of this project of the city.

“Pellets are less polluting, but they still pollute. The ash from pellets is light and can be carried by the wind if dumped in the municipal waste. Besides, the number of people that the city can help turn to pellet heating is too small. Therefore, this can only be a small part of the solution to our problem, Jovanovski explains.

The city authorities also see the pellet heating as a temporary solution. Their best hopes for cutting air pollution from heating are the expansion of the district heating network, as well as the introduction of natural gas infrastructure for households, which is expected in the upcoming years.

Last year there were announcements for a nationwide project for pellet heating subsidies carried out by the government, costing EUR 14 million. But no concrete action was taken because of the political circumstances.