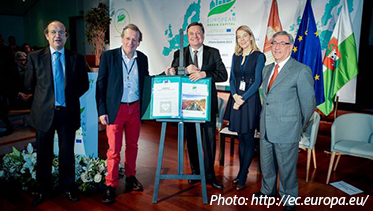 Karmenu Vella, European commissioner for the environment, maritime affairs and fisheries, handed over the title of European Green Capital for 2016 from Bristol to Ljubljana. The award is for efforts and commitment of cities in the European Union to improve the urban environment, boosting awareness of the need for environmental change at the city level. Ljubljana will act as ambassador for sustainable urban development, sharing and promoting best practices, tried and tested in the Slovenian capital, the press release said.

The European Commission is also developing a new voluntary tool which any city can use to benchmark and monitor its environmental performance, based on the 12 criteria used to select green capitals. The aim is to invite all European cities to improve their urban environment and quality of life. The tool is expected to be launched in June.

“The title of European Green Capital 2016 is well deserved and it’s a title that brings with it great responsibility. Taking care of the urban environment means taking care of the health and well-being of the people who live in our cities,” Vella said.

Ljubljana boasts a vast area of green space, 542 square metres per inhabitant, the press release said. Public transport, pedestrian access and 220 kilometres of managed cycling route are the backbone of its urban mobility system. The city can act as a role model, as the European capital with the largest share of separately collected waste. In the new circular economy package adopted in December the Commission proposed actions that will contribute to “closing the loop” of product lifecycles through greater recycling and re-use.

Eight cities have been awarded the title of European Green Capital since its inception in 2010. Stockholm won the inaugural title, followed by Hamburg, Vitoria-Gasteiz, Nantes, Copenhagen and Bristol. Ljubljana will pass the title to Essen.

Towns and cities with a population between 20,000 and 100,000 can apply for the European Green Leaf Award since last year. The title recognises a strong environmental record, with a particular emphasis on efforts that engage citizens in environmental awareness, generate green growth and new jobs. Torres Vedras in Portugal and Mollet de Vallès in Spain hold the title for 2015.