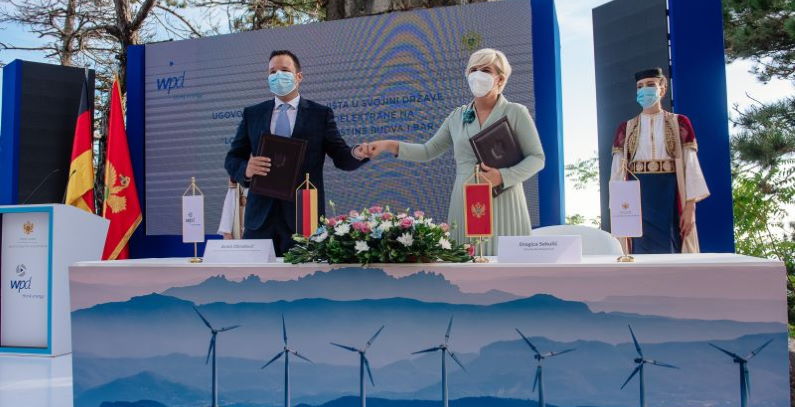 A consortium led by German renewable energy firm wpd has signed a land lease agreement for wind farm Brajići near the Montenegrin coastal city of Budva, a project valued at EUR 101.3 million.

The Brajići wind farm, with an installed capacity of slightly over 100 MW, is projected to generate around 220 GWh of clean electricity a year, enough to cover the needs of more than 50,000 average households, said wpd Adria’s top man, Zoran Obradović, who signed the agreement on behalf of the consortium. The local partner on the project is a firm called Vjetroelektrana Budva.

Wpd is the biggest onshore wind farm developer in Germany. According to the website of its regional subsidiary, wpd Adria, the company has implemented four wind farm projects in Croatia – Trtar Krtolin, Orlice, Katuni, and Ponikve – with a combined installed capacity of nearly 100 MW.

According to an earlier announcement by the Montenegrin Ministry of Economy, the land lease agreement was supposed to be signed in March this year. The negotiations were conducted via video conferencing due to the COVID-19 pandemic.

The wind farm will get no state subsidies or guaranteed prices

Wind farm Brajići will operate in the open market, with no state subsidies or guaranteed prices, according to Obradović, who also said that the wind farm is expected to be put in operation in four years.

Sekulić: clean energy from wind and solar will pave the way for a “Montenegrin green deal”

Economy Minister Dragica Sekulić, who signed the agreement on behalf of the Montenegrin government, said that energy transition in the country has begun, and that the clean energy that will be produced at solar power plant Briska gora and wind farms Gvozd and Brajići would provide a solid foundation for a “Montenegrin green deal.”

Sekulić explained that the deal will be the result of a constructive dialogue on the use of Montenegro’s hydropower, solar, and ecological potentials in a sustainable manner.