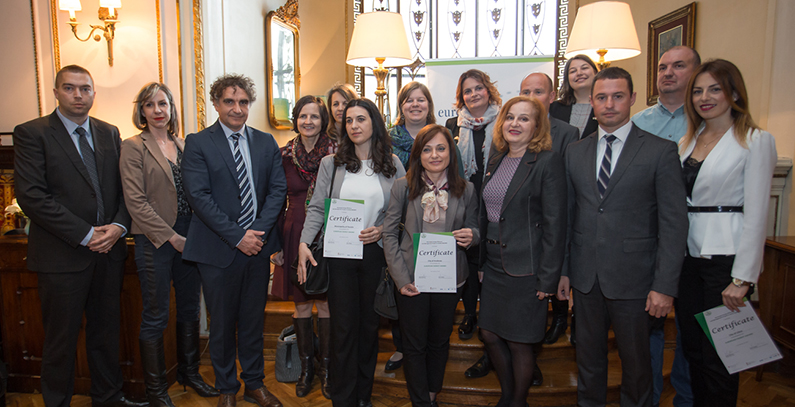 Serbia’s cities of Kruševac and Užice and the municipalities of Paraćin and Vrbas officially joined the European Energy Award (EEA) Association within the Municipal Energy Efficiency and Management Project (MEEMP) in Serbia by signing the license agreement. The EEA Association is a quality management and certification system with more than 1,500 participating municipalities with almost 50 million citizens.

Kruševac, Užice, Paraćin, and Vrbas have been gathering experiences within the all-inclusive EEA process for more than one year and by signing the agreements, they are confirming their commitment to continuously pursue sustainable and ambitious energy and climate targets.

The license agreements were signed by the representatives of the cities and municipalities and Reto Lindegger, board member of the EEA Association.

Opening the conference Energy Management – Cities and Municipalities in Serbia, Miloš Banjac, assistant energy minister in charge of renewable energy sources and energy efficiency, said that the EEA implementation is part of the EUR 10 million MEEMP project. The funds are secured by the Swiss Cooperation Office in the amount of EUR 9 million, while the rest will be invested by cities and municipalities.

The MEEMP project started in June last year and it consists of three components. The first is the EEA, the second is energy rehabilitation of 21 public buildings in two cities and two municipalities, and the third awareness raising.

These are all activities that are implemented by the Ministry, Banjac said, noting, however, that the state budget fund for improving energy efficiency is worth about EUR 1.2 million annually, while this project alone is worth EUR 10 million.

Ursula Läubli, Director of the Swiss Cooperation Office, said that Switzerland provides support to Serbia in three fields – governance, economic development and employment, and sustainable energy and resilient cities with around EUR 20 million per year.

The MEEMP project is one of the largest projects that Switzerland supports in Serbia.

Its objectives include more sustainable energy management at the municipal level through the introduction of the EEA and improved energy efficiency of public buildings in Kruševac, Paraćin, Vrbas and Užice, she said.

Switzerland is introducing the EEA approach to enable Serbian municipalities to implement the national legal requirements under the Law on Efficient Use of Energy.

This will contribute to reaching national and local targets in CO2 emissions, but also attract more investments, Läubli said, adding that supporting local governments is a priority for Switzerland because they are closest to citizens and can best address their needs.

Municipalities enter into cycle of continuous improvement of energy management

Caroline Huwiler, chief of the EEA component of the MEEMP project and project manager at ENCO Energie-Consulting, said that the EEA is a process, a methodological framework, and a label.

“In terms of a process, municipality enters into a virtual cycle of continuous improvement of their energy management performance, starting with the political commitment to engage and to set energy management goals,” she said.

In 4 municipalities in Serbia, the first steps in the process have been taken – political commitment, the establishment of the local energy team, baseline assessment, and based on this initial assessment workshops were held to look in some of the key opportunities that have been identified.

“Based on the action plans that have come up from these workshops, we are in a process of formulating and designing some key projects that can be supported,” Huwiler added.

The next steps are implementation, internal monitoring, and eventually certification, for those who reach the required level of performance, and awarding.

The EEA suggests that there are 6 areas in which a municipality can either directly or indirectly influence in its daily business, and energy is mainstreamed in all of these areas:

“In all of 6 areas we identified key projects that can help cities improve their performance and score,” Huwiler said.

Matthias Nabholz, head of the Department for Environment and Energy of the City of Basel, explained how this city won the European Energy Award Gold. The best illustration of this award was a picture he showed – the Rhine River, in the very center of the city, with dozens of swimmers.

He said that the first local energy act, which took into greater consideration energy efficiency and environmental protection, was adopted in the early 1980s, with two more adopted thereafter. The last, from 2017, foresees the ban of fossil fuels in the heating sector.

About 50% of the energy in this sector is generated from waste, while natural gas is increasingly replaced with wood.

Basel consumes electricity that is 100% generated from renewables, which it produces not only in its surroundings but also at wind farms in Germany and solar power plants in Spain.

The price of electricity is 18.3 eurocents/kWh, of which 6.5 is the price of the energy, 5.8 network costs, 5.5 a steering tax for reducing consumption, which is returned to citizens, and 0.5 subsidies for renewables, he said.