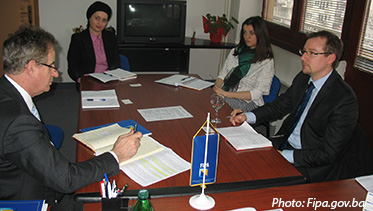 Matthias Schmidt-Rosen, director of KfW Development Bank’s office in Sarajevo, visited the Foreign Investment Promotion Agency (FIPA) of Bosnia and Herzegovina and told director Gordan Milinić about projects that the German creditor will financially support in the country, pointing out that the funds of EUR 60 million were provided for wind power plant Hrgud. Wind farms Mesihovina and Podveležje were previously funded with EUR 72 million and EUR 65 million, respectively, the agency said.

KfW also financially supported projects of drainage, waste water treatment and water supply in Bihać, Zenica, Tuzla and Banja Luka based on the cooperation agreement signed by governments of Germany and BiH.

The Council of Ministers of BiH earlier said it appointed a team to lead negotiations with KfW towards concluding the loan agreement to fund a 48 MW wind farm in the Republic of Srpska. The concession to build and operate the Hrgud wind power plant – comprising 16 turbines – in the municipality of Berkovići was given to power utility Elektroprivreda Republike Srpske (ERS). The repayment period on the loan will be 15 years with a four-year grace period and it will be allocated to the Republic of Srpska, BiH government said.

The facility’s annual net production is estimated at 126 GWh, while the concession is granted for a period of 50 years. ERS, which operates installed capacity of 1.35 GW, submitted a request for the concession back in 2014. This move was preceded by a detailed study of the wind potential of five locations in Berkovići by Danish company COWI, funded by KfW. The municipality adopted the spatial plan three years ago, setting five square kilometres for the wind farm at an altitude of over 1,000 metres at Hrgud village. The local authority said ownership issues need to be regulated and that the community will see the development of roads and water supply, while the town’s budget will get significant income from the concession.