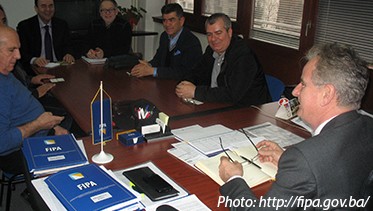 Idris Fatih Şahin, owner of Capital Group AŞ from Istanbul, visited the Foreign Investment Promotion Agency (FIPA) with associates on 10 February, where he talked with director Gordan Milinić and the regional representative of FIPA for Herzegovina Amir Kazić about investment in Bosnia and Herzegovina. Projects of solar energy are worth BAM 300 million (EUR 153.4 million) and those in the field of tourism and agriculture also have volume of a few hundred million convertibile marks, FIPA said.

The first phase is the implementation of 100 MW in photovoltaic plants, out of which a unit of 65 MW will be built in Bančići, Ljubinje, in the country’s southeast. Preparations are underway for the construction of solar power plants Čapljina-Neretva 1 of 5 MW plus 5 MW, Ljubinje 1 of 2 MW, Mostar 1 of 5 MW, Mrkovići 1 of 1.5 MW. The company also plans to build wind farms in the first phase with up to 250 MW, the report said.

Capital Group is owner and founder of ITM Controls Ltd. Sarajevo, Sarajevo Solar IFS, IFS Solar Ljubinje, Smart Energo Sistemi Pale and Energoinvest TAT-IFS. With ITM Controls it invests in both renewable energy and in production of healthy food and tourism and it plans a chain of specialized retail stores with products from its eco villages Ekofutura Hreša, Biona Vogošća and also products from subcontractors from the project Jahorina Organic Farm, products of the Alpine goats farm Žepa and others.