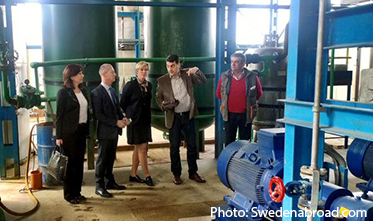 District heating in Prijedor, in the northwest of Bosnia and Herzegovina, switched to biomass, as the first fire was lit in the new boilers.

“The so-called camp fire was started in one of two boilers, and the second one will be activated in a couple of days. This way the boilers are dried, the temperature is being increased and from December 1, as was announced, heating on biomass will be launched,” Ljiljana Despotović, head of Toplana system, told Srna news agency. She explained this is the usual procedure after the boilers are mounted, and that after the drying process is complete, biomass is sent by a line in. “We purchased about two thousand cubic metres of biomass and this is enough for the start, and we have an arrangement with the enterprise Forests of the Republic of Srpska, our only supplier for the moment,” Despotović added, according to a report on Nezavisne portal.

Austrian company Urbas is the main contractor in the switch from heavy fuel oil to the renewable source. A cogeneration system is also being built, and it should be complete by the beginning of 2016. The European Bank for Reconstruction and development lended EUR 7 million for the reconstruction of the heating plant, while the Swedish International Development Cooperation Agency (SIDA) donated EUR 2 million, from which EUR 400,000 is for metering devices for consumers. The switch should bring sustainability to Toplana, which is overburdened with loans because of high prices of the fuel that was used, and the enterprised is being kept afloat by borrowing from the town’s budget.