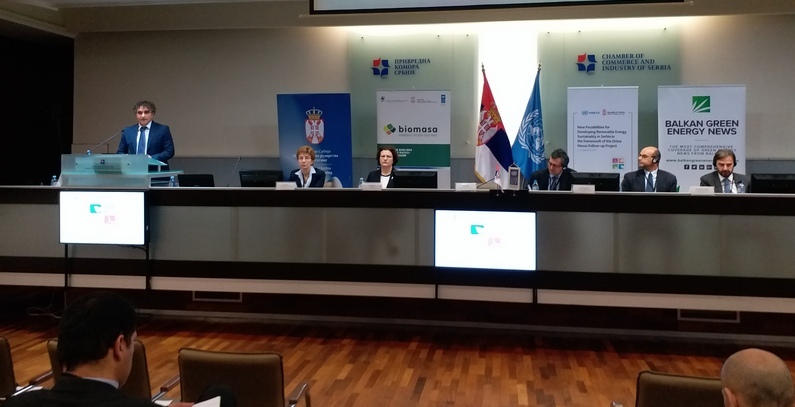 The latest in a series of Hard Talk events, titled “New Possibilities for Developing Renewable Energy Sustainably in Serbia,” kicked off in Belgrade today, enabling a dialogue between various energy market players from both the public and private sectors. The two-day event is organized by the United Nations Economic Commission for Europe (UNECE), in cooperation with the Ministry of Mining and Energy of Serbia, the United Nations Development Program (UNDP), and the Ministry for Environment, Land and Sea of Italy.

In a welcome address of the Hard Talk, Gianluca Sambucini of the Sustainable Energy Division at UNECE explained that the aim of the event is to provide a platform for dialogue that would identify solutions for improving the investment climate in the renewable energy sector and developing bankable and sustainable projects in hydropower as well as other sectors.

Vassilis Triantafyllos, Regulatory Expert at Revelle Group, presented the Discussion Paper on the sustainable development of renewable energy sources. He said the document is a result of a research conducted by independent experts, based on, among other things, interviews with investors.

The document defines some of the most common barriers to developing renewable energy sources, such as lack of support mechanisms at this particular moment (a kind of vacuum between feed-in tariffs and auctions), very complex permitting procedures, political resistance, lack of awareness among consumers about renewable energy sources, grid access, as well as financial risks.

Salvatore D’Angelo of the Italian Ministry for Environment, Land and Sea highlighted the importance of applying a holistic approach to renewable energy development, adding that Italy is using the nexus approach.

It is necessary to take into account intersectoral relations since electricity generation sometimes has an adverse impact on the environment, according to him.

Electricity generation capacities will be increased by 10% – Banjac

Miloš Banjac, Assistant Minister of Mining and Energy, said that Serbia will have 700 MW in renewable energy capacities by the end of 2020. Of the total, 500 MW will be wind energy and the rest other renewable sources, while the overall capacity for electricity production will be increased by 10%, he said.

Banjac: Serbia will have 700 MW in renewable energy capacities by the end of 2020

Banjac also announced that two district heating plans should switch from fossil fuels to biomass by the end of the year as part of a program the ministry is implementing in cooperation with the German development bank KfW and the Swiss Cooperation Office in Serbia (SECO).

The plan, according to him, is for a total of 10 district heating plans to switch to biomass.

Banjac noted that in the past five years Serbia has managed to increase its biogas cogeneration capacities from 4.8 MW to about 11.1 MW. Six biogas facilities have been built, with a total capacity of 6.3 MW, in what increased the overall biogas capacity by 130%, according to Banjac.

He also said that biomass still has the greatest potential among the renewable energy sources in Serbia, even though it is used a lot, but very inefficiently.