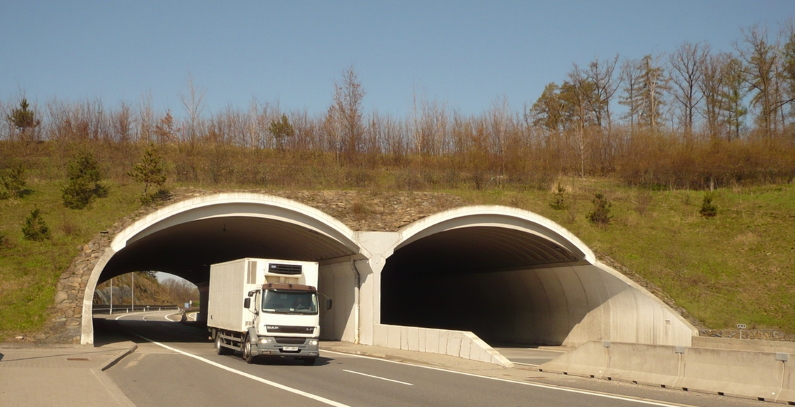 Infrastructure must be planned and adapted in a way to enable connectivity between areas inhabited by migrating animals. Roads and railways narrow their territories and cut their corridors, putting their population in danger. Green bridges or ecoducts for large mammals are the most effective solution to repair the damage. Such structures have been obligatory and regulated for more than half a century in Western Europe, alongside animal tunnels.

In our region, the overpasses are common in Slovenia and they have begun to appear in other countries. Experts gathered at ConnectGREEN project (2018-2021) aim to maintain and improve the ecological connectivity between natural habitats, especially between Natura 2000 sites and other protected areas of transnational relevance in the Czech Republic, Hungary, Romania, Slovakia, Serbia and Ukraine.

The Carpathians span seven European countries including Romania and Serbia. The mountain range, covered in ancient forest and with little or no continuous human presence in large sections of land, provides the conditions for wild animals to thrive. Scientists, government representatives and conservationists have joined hands in an effort to systematically maintain or re-establish the pathways for animals in the Carpathian region. The project for the wildlife crossings, sometimes in the form of green bridges, is called ConnectGREEN – Restoring and Managing Ecological Corridors in Mountains as the Green Infrastructure in the Danube Basin.

In the past years, Romania got its first overpasses designed particularly for the said purpose. They are already common in the Czech Republic and Slovenia. The ecoducts have begun to appear elsewhere in South-Eastern Europe as well.

Some of the existing infrastructure can be adapted to an extent. But the animal corridors are in particular places, which can be determined through research. Then engineers make ecoducts in sizes and shapes suitable for the large animals. They have proven to be the most efficient solution.

Since its rulebook came into force in 2007, Croatia built several green bridges. Also, many viaducts and tunnels there have been built or made longer than initially planned to make enough space for wild animals.

The idea is to integrate environmental protection, political decision making, management of protected areas and forestry and other disciplines in order to incorporate the ecoducts into policy and practice. The efforts to preserve ecosystems in the area are focused on corridors for the grey wolf (Canis lupus), Eurasian lynx (Lynx lynx) and the brown bear (Ursus arctos), all highly endangered. The Carpathians also have the largest populations of the reintroduced European bison (Bison bonasus) and the imperial eagle (Aquila heliaca) on the continent.

The accent is on spatial planning and planning in general. Namely, passages crucial for large carnivores wouldn’t need to be built across or under highways and railways in the first place if they weren’t cut by construction and the spread of agricultural land. 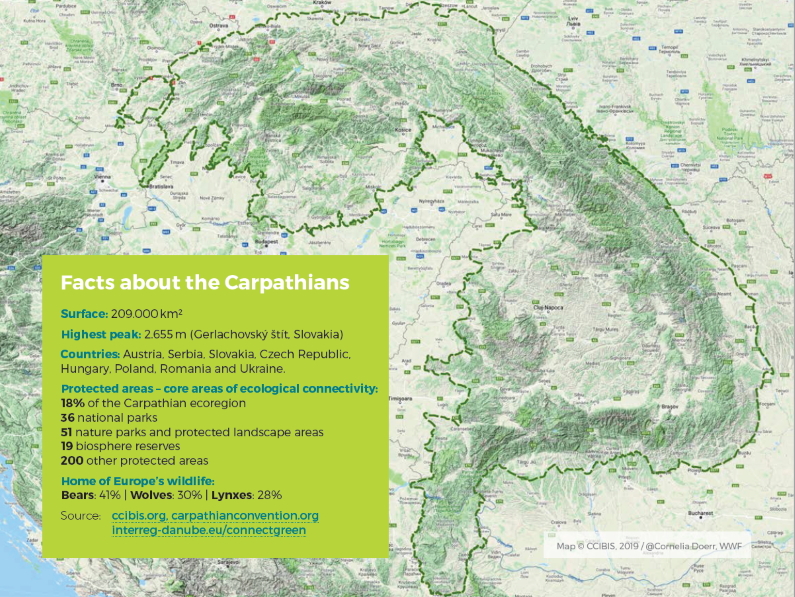 The European Commission has endorsed the precautionary principle and ConnectGREEN supports the stance that natural migration corridors must be left intact.

Officials, engineers and the general public overwhelmingly support the protection of nature, according to a poll from 2014 cited in project documentation. At the same time, the data reveals they are poorly informed of what it exactly implies and of the concept of ecosystem services.

Namely, plants, water, the sun, soil, animals and other elements interact, creating a functional natural balance. They also produce the resources for our survival. They are intertwined in a unique mechanism that leans on biological diversity for balance.

There are an estimated 7,200 brown bears, 3,000 wolves and up to 2,400 lynxes in the whole region, according to the most recent official reports. The large carnivores have a crucial role in the food chain and biodiversity. For example, if they hunted less, the number of rodents and herbivores could explode and open the way for diseases, while it would exhaust their own food sources.

It is important to know that the three aforementioned species require vast space. New barriers such as infrastructure and suburbs often divide it. The process is called fragmentation. The goal however is connectivity – to stop and even reverse the process and prevent the risk for the species.

Environmentalists claim nature reserves and other protected areas are already too small and too scattered to sustain biodiversity. Noise and light are other major factors that get in the way of large mammals, together with fences. Moreover, open spaces like agricultural fields or pastures limit their movement, as they tend to avoid such terrain, particularly during the day.

The participants in ConnectGREEN highlighted the impact of climate change on the habitats as well, warning that wildlife may need to move to other places.

The main barriers, roads, are a threat in two ways. When they are fenced, they may cut the path for animals, which in the Carpathians include the roe deer, red deer, chamois and moose. On the other hand, no fences mean high mortality, alongside the danger for people in cars.

ConnectGREEN is first helping to integrate, on an international level, the way information on the ecological framework is gathered. It is the basis for planning and the construction of ecoducts.

The methodology, which is already prepared, should be incorporated into laws, regulations, planning and practice. All this is only possible with much more intensive research of animal migrations.

One of the necessary tools for the managers of national parks, nongovernmental organizations and local authorities is access to European Union funds, government stimulus and private contributions.

In order to secure informed decision-making and necessary funding, it is important to establish cooperation between states and professionals from various sectors and get green infrastructure and corridors a strong legal status. If we don’t want large construction interventions to cause harm, necessary migration networks between populations of wild species must be defined. At the same time, the maximum possible economic potential is targeted, according to project documentation.

ConnectGREEN pointed out the green bridges across roads and railways should have a natural surface and vegetation, so that ideally the animal isn’t even aware of the vehicles below. Unfortunately, people use such structures in some places. But when it comes to bears, wolves and lynxes, they clearly mustn’t cross paths with humans.

Other corridors can be maintained or restored by building viaducts across rivers and important habitats or with tunnels under transport infrastructure.

In some places, fences are designed in a way to lead wolves, lynxes and bears to crossings. Lighting and acoustic technology is an option for warning both animals and drivers. Blue infrastructure works – canals, drainage systems or marshes, for instance, are an additional solution for water resources to strengthen biodiversity and open or reopen migration corridors.

ConnectGREEN’s objectives lean mostly on the Framework Convention on the Protection and Sustainable Development of the Carpathians – the Carpathian Convention, with the intention to enhance it. The project is implemented within the Interreg Danube Transnational Programme and lasts three years through May 2021. 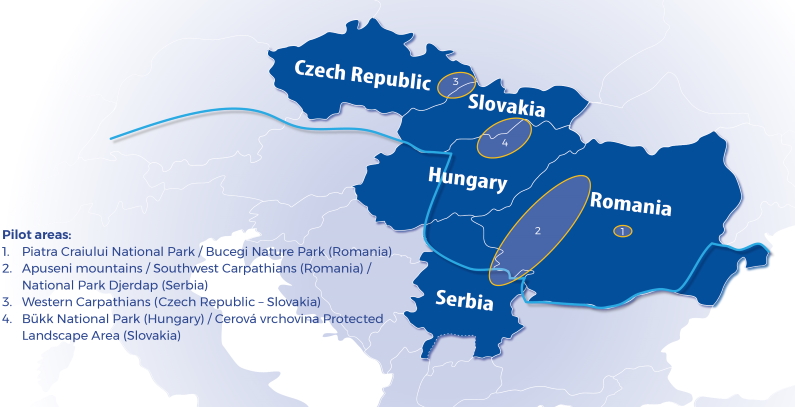 The four pilot areas are the Piatra Craiului National Park in Romania; Apuseni mountains in Romania together with National Park Đerdap in Serbia; Western Carpathians in Czech Republic and Slovakia; and the Bükk National Park in Hungary and Cerová vrchovina Protected Landscape Area in Slovakia.

The WWF International Danube-Carpathian Programme from Romania is the leading partner among 11 in total. The National Institute for Research and Development in Constructions, Urban Planning and Sustainable Spatial Development (URBAN-INCERC) and Piatra Craiului National Park are the other two partners in Romania. Serbia is represented by the Institute of Architecture and Urban and Spatial Planning of Serbia (IAUS) and National Park Đerdap.

The project will enable the improvement of planning practice with the obligatory construction of green bridges across regional roads, motorways and railway infrastructure, said Marina Nenković-Riznić from IAUS, ConnectGREEN’s coordinator in Serbia.

“Even though the legal obligation to build the said passages is clear in a series of regulations in Serbia, none have been constructed so far. The reason is, among others, that the migration corridors of large mammals which would enable an adequate selection of locations for green bridges haven’t been defined nor mapped. The Institute of Architecture and Urban and Spatial Planning of Serbia will introduce the obligation through spatial and urbanistic plans that will be adopted during the implementation of the ConnectGREEN project,” she asserted and underscored the Strategy on the Identification, Preservation, and Management of Ecological Corridors in the Carpathian Countries has been adopted.

The representatives of ConnectGREEN will insist in discussions with relevant ministries and other stakeholders in the environmental protection area on placing the measures including green bridges into strategic national documents and programs for the protection of biodiversity and nature, Nenković-Riznić added.

With knowledge, awareness and proper planning and civil engineering, there is a strong chance that wolves, bears, lynxes and other animals have a future in the Carpathians.