Photo: Manolis Panagiotakis, right, at a recent signing of a BSTDB loan (BSTDB) 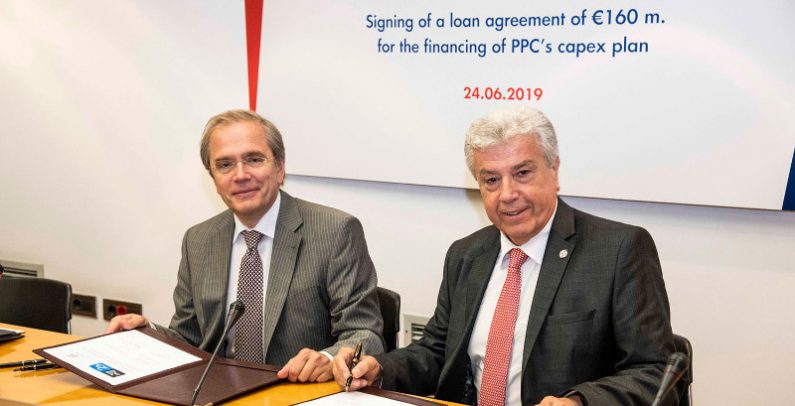 Greece’s majority state-owned Public Power Corporation (PPC) Chairman and CEO Manolis Panagiotakis has tendered his resignation to new Greek Environment and Energy Minister Kostis Hatzidakis, saying that the move is aimed at making it easier for the new government to implement its policy.

Hatzidakis thanked the outgoing PPC CEO for his years of service and especially efforts after an agreement between the previous Syriza-led government and the country’s creditors reduced the power utility’s market share without any financial compensation, the ministry said in a statement, Ekathimerini reported.

The minister also asked Panagiotakis to stay on until a successor is appointed.

Panagiotakis briefed the minister on the situation at PPC and vowed to continue monitoring developments and to work with the political leadership regarding the issues that are an immediate priority for PPC, until he is replaced.

The Energy Ministry is already in the process of seeking a new head for the Greek power company. The replacement will have to be conducted by the state asset utilization super-fund, which must also replace five state-appointed PPC board members whose mandate expired on Wednesday.

Given the time required for the appointment of a new management at PPC – 21 days from the moment the super-fund calls for an extraordinary general meeting of the utility – the Panagiotakis administration will have to take measures aimed at saving PPC from bankruptcy, according to the report.

PPC reported a EUR 542 million loss in 2018, driven by high CO2 emission charges and NOME net impact, as well as lower turnover, which decreased by EUR 201.8 million, or 4.1%, due to lower revenues from electricity sales, which slumped by EUR 335.4 million, or 7.3%, as a result of market share loss and the reduction in domestic electricity demand.

At the same time, the company has EUR 2.4 billion of arrears from bills left unpaid during the Greek debt crisis, which began in late 2009.

Interdependence of human well-being and biodiversity