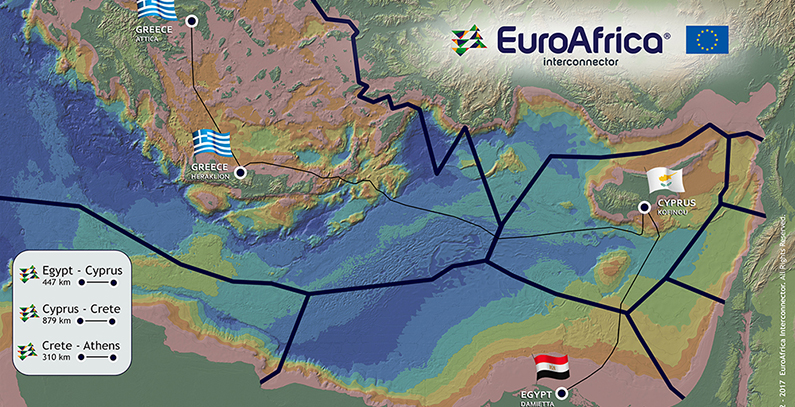 According to EuroAfrica Interconnector Limited, the signed agreement follows the conclusion of viability studies conducted by this company, which demonstrated the benefits of the project. The agreement also marks the start of the project implementation.

The agreement envisages the construction of the 2,000 MW HVDC cable in two phases. The first phase envisages 1,000 MW cable from Crete to Attica to be operational by 2020, and from Cyprus to Egypt, and from Cyprus to Crete by 2021.
The EuroAfrica Interconnector will start near Damietta in Egypt and take the sub-sea route to Cyprus where it will connect at the Kofinou station. From there it will head west and take a sub-sea route to Korakia point in Crete, Greece and from there continue to Attica, mainland Greece.

Greece and Cyprus are involved in another project, for the construction of the 1,518 km subsea EuroAsia Interconnector cable, which will connect the electricity grids of Cyprus, Israel, Crete and Attica in Greece.

Ioannis Kasoulides, Chairman of the Strategic Council of the EuroAfrica Interconnector, said that this historic agreement introduces the first major electricity interconnection project between Africa and Europe.

The Minister of Electricity Mohamed Shaker El-Markabi said that the project is of great importance to Egypt’s strategic plan for economic development and energy security.

“Egypt will be an important electricity and energy partner for the EU,” he added.