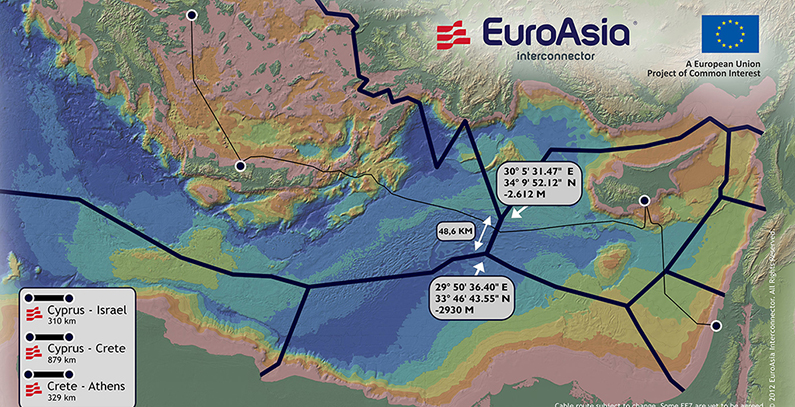 The Republic of Cyprus has issued a notice for the expropriation of land for the HVDC converter station of the EuroAsia Interconnector. The 2,000 MW and 1,518km subsea cable, which will connect the electricity grids of Cyprus, Israel, Crete and Attica in Greece, has been declared a European Union Project of Common Interest (PCI).

According to the EuroAsia Interconnector project developer, the Government of Cyprus issued an expropriation order and description of the land site for the converter station located near Kophinou, saying “this was necessary for the purpose of the public good, being for the promotion and development of energy.”

The government decree concluded that as no objections were submitted within the predetermined timeframe, the Minister of Energy, Commerce, Industry, and Tourism ordered the expropriation of the property which will be leased to the project promoter.

The construction of the cable will take place in three phases (Cyprus-Israel, Crete-Attica, Cyprus-Crete). The total value of the 1,000 MW first stage of the project is EUR 3.5 billion while the construction of the Crete-Attica interconnection is planned for December 2020 and for both the Cyprus-Israel and Cyprus-Crete interconnections for 2021, the EuroAsia Interconnector project developer said in a press release.