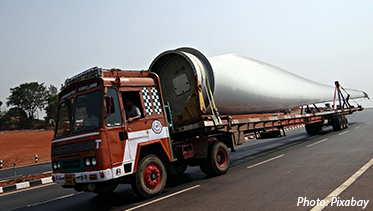 Works are continuing after the first out of 26 planned power generators was transported and erected at Krnovo plateau in central Montenegro near Nikšić, local portal Onogost.me reported. The equipment was brought by a special truck, as some parts are 50 metres long and weigh up to 153 tonnes.

Construction work on the 72 MW wind power plant was launched last year in May. Total worth of the project is EUR 120 million. Wind turbines are being positioned at an altitude of 1,500 metres, where estimated average wind speed is from 5.5 to 6.5 metres per second.

The project for the wind power plant envisages the construction of two transformers, transmission lines, wind turbines system and the maintenance building.

This is the first large-scale investment in the country’s electricity generation capacity since the 1980s. Once constructed and operational, the wind farm will represent 8% of the total installed capacity and 6% of total electricity production in Montenegro.

The project is supported by the European Bank for Reconstruction and Development, KfW bank from Germany and French company Proparco, subsidiary of Agence Française de Développement. It is realized by the consortium of Akuo Energy from France and Ivicom Consulting from Austria.