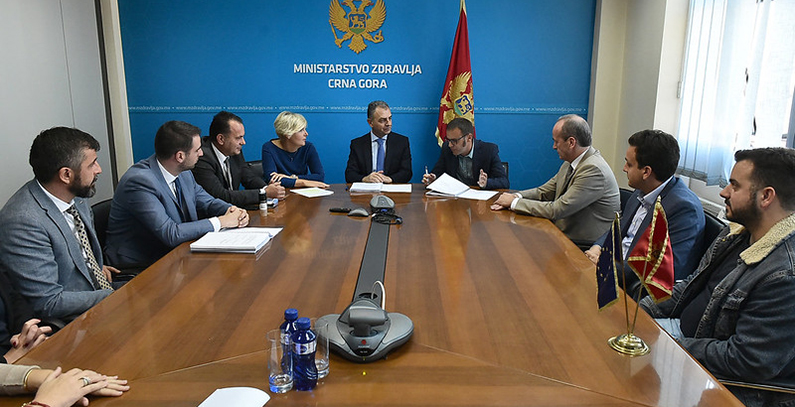 As part of the second phase of the Montenegro Energy Efficiency Project (MEEP), health minister Kenan Hrapović and economy minister Dragica Sekulić have signed a EUR 1.4 million contract with a consortium of LD Gradnja, Ramel and Ening to implement energy efficiency measures at the General Hospital of Bar and Walk-In Clinic Ulcinj.

The contract refers to energy renovation, including the replacement of the windows and doors, the installation of thermal insulation on the facade and roofs, the replacement and improvement of the system for the preparation of sanitary hot water, as well as the modernization of the lighting and heating systems.

So far, around EUR 7.5 million has been invested in healthcare facilities under this project, while expenditures for energy have been reduced by about EUR 500,000 a year, Hrapović said.

New tendering for energy renovation worth EUR 1.1 million will be launched very soon

He said that tendering for a EUR 1.1 million energy renovation of the Psychiatric Hospital of Kotor, Special Hospital Vaso Ćukovic in Risan, and Walk-In Clinic Tivat is planned in the next few days.

Economy minister Dragica Sekulić said that in 2009 the ministry started implementing the Montenegro Energy Efficiency Project, which is financed from a loan provided by the International Bank for Reconstruction and Development (IBRD). The project aims to improve the energy performance of public facilities (in the health and education sectors), as well as to raise public awareness about energy efficiency measures.

In 25 renovated facilities, energy consumption has been reduced by 42.5% on average

So far, 25 public buildings have been renovated – 16 health facilities, eight educational facilities, and one student dormitory – in a EUR 9.58 million investment. Energy consumption has decreased on average by 42.5% and expenditures by around EUR 600,000 per year.

Sekulić said that the second phase of the Montenegro Energy Efficiency Project began in July 2018, when a EUR 6 million loan agreement was signed with the IBRD. In the second phase, in addition to energy renovation, a monitoring system will be introduced, to monitor the achieved savings and establish a sustainable system of financing energy efficiency projects in the public sector.