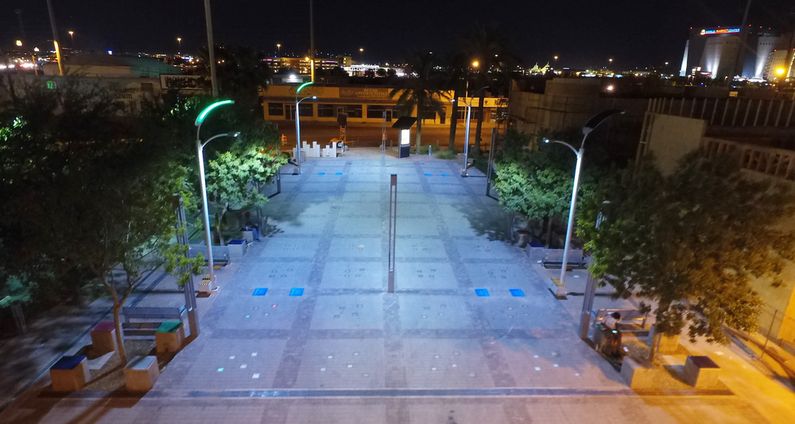 The city of Las Vegas, Nevada has installed the experimental street lights created by EnGoPlanet. The main source of energy for the Smart Street Lights are solar panels and pedestrian footsteps. These street lights could offer a solution for the cities struggling to secure street lights.

Built in the Nevada desert, Las Vegas is best known as an one of the leading entertainment hubs in the United States. It is quickly becoming a leader in municipal sustainability.

The City of Las Vegas and EnGoPlanet, a New York-based clean tech start-up, announced that they successfully installed the world‘s first smart street lights system. This comes just months after Petar Mirović, CEO of EnGoPlanet announced the project in an interview with the Balkan Green Energy News.

The lights are powered by a combination of kinetic and solar energy. The kinetic energy comes from pedestrians, as their footsteps on the kinetic tiles generate energy which is quickly stored in a battery. Motion sensors will turn the lights on when people walk by, and switch off to save energy when nobody is around.

During the day, the Smart Street Lights system collects Sun‘s energy through photovoltaic (PV) panels placed on top of the candelabra, rendering the system completely autonomous and off the grid.

The lights can change colours, helping keep the surrounding in tune with atmosphere of the city at any given moment. The system can serve as a Wi-Fi hotspot and even offer pedestrians both contactless and USB-cable charging for mobile phones.

“We want to provide the highest service levels while also looking to the future and ensuring that we are sustainable,” said Las Vegas Mayor Carolyn G. Goodman.

What may look as just another gig in the city flushed in lights from every spot is in fact a good example how a city with exorbitant electricity bills can save some money and even motivate a further change.

The LED-equipped system is placed in Art District’s Boulder Plaza, which is slated for a transformation into a “downtown of innovation”.

“Las Vegas strives to be on the cutting edge of all things, and this projects coincides with plans to develop an innovation district in our downtown,” added Mayor Goodman.

Las Vegas is a sunny city, and it can easily employ this abundant source of energy.

“Urban cities have to build the smart infrastructures of tomorrow that will be able to harvest all that energy. This project is small, but a very important step in that direction,” explained Petar Mirović from EnGoPlanet.

The Serbian-American company, established in 2013 after the hurricane Sandy left parts of New York with no power for 7 days, reminds that clean and free energy is everywhere around us, and that it can be harvested in places without electric grid.

“EnGoPlanet Smart Street Lights are also a solution to the 1.4 billion people that do not have street lighting. Today they live in the dark,” added Mirović, calling all interested investors to join their crowdfunding campaign to raise money for the project of installing smart street lights in 10 rural areas in Africa that don’t have access to electricity.