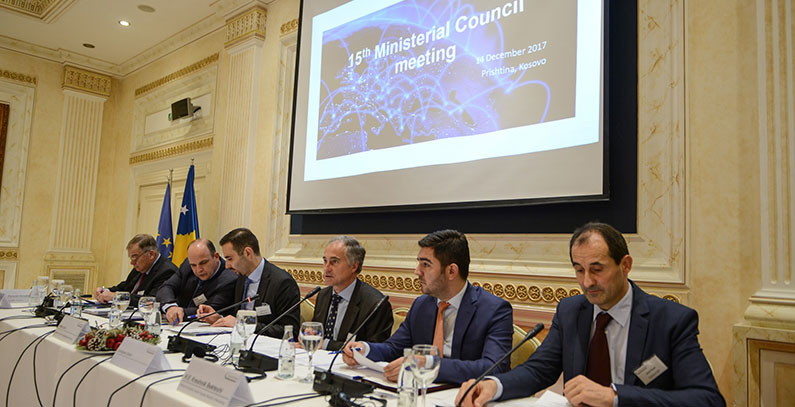 The Energy Community Ministerial Council launched a process aimed at setting targets for renewable energy, energy efficiency and greenhouse gas emission reduction for 2030 in the Energy Community. In early 2018. the Contracting Parties will be supported by guidelines for the preparation of integrated National Energy and Climate Plans. The Council also invited the Secretariat and EBRD together with the European Commission to conclude the Policy Guidelines on Competitive Renewable Energy Procurement.

These are some of the most important conclusions adopted at the meeting of the Ministerial Council held in Pristina.

The Ministerial Council asked the Secretariat to propose to the Climate Action Group (to be renamed Energy and Climate Committee upon adoption of the Recommendation) guidelines for the preparations of integrated national energy and climate plans.

“The new mechanism will ensure a robust framework for streamlined reporting and transparent implementation of energy and climate policies,” Energy Community Secretariat said in a statement.

The Draft Policy Guidelines on Competitive Renewable Energy Procurement, presented at the 4th Meeting of the Renewable Energy Coordination Group (RE CG) held in November, proposes the introduction of the renewable energy auctions. The key provision of the Draft is a shift from feed-in tariffs to feed-in premiums (FIP).

The Ministerial Council welcomed the proposal of the European Commission for a Recommendation on Chapter II, Chapter IV and Annex VI of Directive 2010/75 and EU on industrial emissions.

Based on Ministerial Council Decision in 2013 so far only Chapter III, Annex V, and Article 72(3)-(4) of Directive 2010/75/EU are applicable in the Energy Community.

Before the Ministerial Council, the Health and Environment Alliance (HEAL) called on political leaders to put the countries on track for swift and significant reductions of harmful air pollutants, ahead of the 2028 full implementation deadline foreseen in the Industrial Emissions Directive.

The Ministerial Council recalled the imminence of the implementation deadline of the Large Combustion Plants Directive of 1 January 2018 and urged Contracting Parties to ensure its full implementation and involve the Secretariat in its monitoring. The Ministerial Council welcomed the Secretariat’s announcement to set up a joint monitoring instrument with the European Environmental Agency.

The Treaty Establishing EnC, in force since July 2006, said that the LCDP must be implemented by 31st December 2017. However, in October 2013, the Ministerial Council of the EnC adopted the rules necessary for the implementation of the LCPD. This includes the possibility to prepare a National Emission Reduction Plan for the period 2018-2027 and to apply limited lifetime derogation for certain plants until end 2023.

For example, Serbia will shut-down 8 coal-fired power plant’s units of public power utility Elektroprivreda Srbije (EPS) which do not comply with ecological requirements of the European Union’s Large Combustion Plants Directive, by 2024.

The Ministerial Council adopted the priorities for the former Yugoslav Republic of Macedonia’s Presidency in 2018.

Next year the Energy Community will focus on Treaty amendments, full implementation of Third Energy Package, in particular unbundling of transmission system operators (electricity and gas), implementation of the regional Memorandum of Understanding concluded in the framework of WB6 on electricity day-ahead market coupling and balancing, adoption of measures under the Title III of the Energy Community Treaty (licensing and regional cooperation in electricity emergency situations to avoid unilateral export bans), conclusion of the regional disputes, agreement on climate targets (RES, Energy Efficiency and GHG reductions) for 2030 and integrating energy and climate planning on national and regional level.