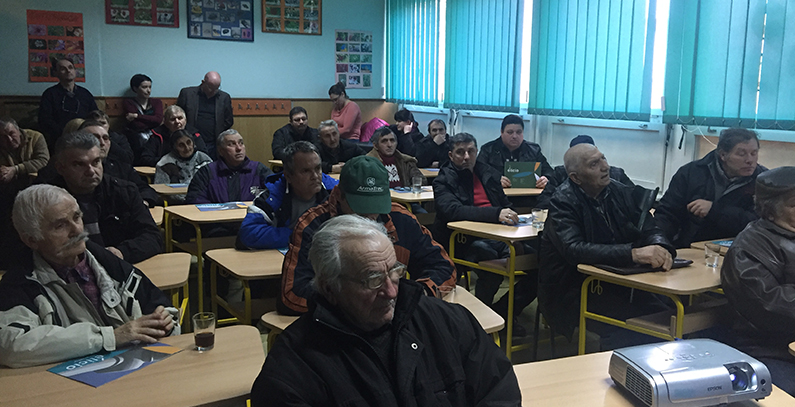 Representatives of Elicio company held a public presentation of Alibunar and Malibunar wind farms, informing the citizens and land owners in the village of Vladimirovac about the plan and schedule for their construction.

Project manager Marijan Rančić presented the plan for construction and reconstruction of roads, as well as the process of shipping and installing turbines, announced Elicio.

“The support of the citizens is very important to us, so that everything transpires smoothly. Members of our team will be available for contact every day, and a mechanism for complaints will also be established”, said Rančić.

Alibunar project will have a capacity of 42 MW. The wind farm will have 21 turbines made by German Senvion. Necessary permits have been obtained, as well as the temporary status of privileged power producer, while obtaining the license for the power transmission line is being obtained in cooperation with Elektromreže Srbije (EMS).

Construction is expected to start in the second half of this year. The expected annual production of electricity is 113.109 MWh, and the value of the investment is EUR 72,64 million.

Construction is set to begin in the following weeks, as soon as weather conditions allow it. Expected annual production is 23.8476 MWh and the investment’s value is EUR 13,8 million.

“The plan is to finish construction of Malibunar wind farm and connect it to the grid by the end of this year, while Alibunar is scheduled for the end of next year. It is hard to give an accurate estimate because the weather affected many factors”, said Danijela Isailović, corporate communications officer at Elicio, for Balkan Green Energy News.

Elicio is a Belgian company that in 2014. took over the projects of Electrawinds company, including Malibunar and Alibunar in Serbia. Elicio is part of Nethys group, an energy and telecommunications giant.