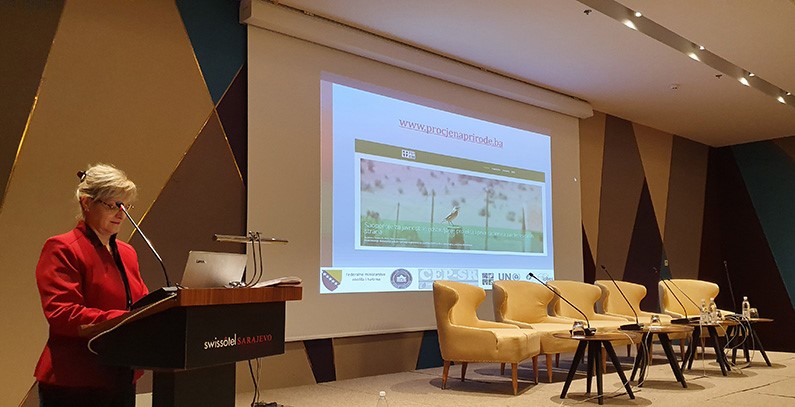 In the past decades, and especially after the 2005 Millennium Ecosystem Assessment, the term ecosystem services has been used in public discourse on an international level for any kind of benefit for people stemming from a sustained process in nature (ecosystems).

“Although the said terms are incorporated in Bosnia and Herzegovina’s legal regulations in environmental protection, they still haven’t been widely used in the past decade. The fact that they aren’t adapted to the spirit of the local languages contributed to that,” said Project Coordinator prof. Senka Barudanović.

Within the project called “Assessment of the State of Nature and Management of Natural Resources”, the final version of the assessment concept was adopted and scientists, professionals and practitioners were invited to join the team of authors preparing the document.

The project’s general goal, Barudanović says, is the establishment and the development of permanent relations or dialogue between the scientific community and decision makers, and the purpose is to base decision making affecting nature on science. The assessment will unify and analyze the existing scientific, technical and knowledge from folk tradition about nature’s contributions in BiH.

Project implementation began in January 2019. The most significant event was the first stakeholder workshop in Sarajevo in mid-October, and the most important result is the document called the assessment concept.

With regard to BiH assessment in the country, two main questions arise:

The methodology of the Intergovernmental Science-Policy Platform on Biodiversity and Ecosystem Services (IPBES), which produced the global assessment, will be used to find the answers to these questions.

Upon the request of signatory countries, IPBES conducts the most comprehensive assessment of world knowledge about the burning issues in biodiversity.

The Assessment Report on Pollinators, Pollination and Food Production (2017) is the platform’s first thematic assessment. After it was adopted, new and different policies were introduced in many countries in the world on pesticide use.

Workshop discussions were used as basis for assessment concept

A large number of stakeholders from different sectors of the economy and society were invited to the first workshop, while there were also attendants from different administration levels. Representatives of the nongovernmental sector were also called to join.

As the purpose of the project is to improve the decision-making process in the area of nature and natural resources, the criterium for picking stakeholders is their direct influence on the state of nature.

During the first part of the workshop, coordinators and Mehmed Cero, Assistant Minister at the Federal Ministry of Environment and Tourism, presented the project. Thematic discussions in three groups were held in the second part. The participants in the discussions also filled out polls on the state of nature and natural resource management in BiH.

The very fruitful discussion at the workshop provided the foundations for the assessment concept document. In line with the IPBES methodology, the concept determined the scope, width and content of the future assessment and the basic topics it would cover.

“After this step, the next phase of the project implies gathering the authors to prepare the assessment document itself. As the project needs to contribute to the improvement of the visibility of the information that relevant decisions will be based on, we expect the scientific community will be interested to contribute to progress in society this way,” Project Officer Ena Hatibović said.

Assessment will be finished in two years

After the Assessment of the State of Nature and Management of Natural Resources in BiH is prepared, which will take two years, the experts will draw short and clear conclusions, which will then be submitted for adoption at the highest political level.

After the project is finished, in Hatibović’s words, the process includes making decisions upon the conclusions and the scientific facts reached via the assessment and on the basis of the scientific research conducted so far.

One of the project’s goals is the establishment of a permanent mechanism – a domestic platform for the dialogue between the scientific community and those who make decisions concerning the state of nature. Considering the sectoral and administrational complexity in BiH, the scientific-political platform for nature needs to be addressed with great care as the project is further implemented.

The project contract was signed in December 2018 between the University of Sarajevo (Center for Ecology and Natural Resources –Academic Sulejman Redžić) and the World Conservation Monitoring Centre (WCMC) based in Cambridge in the United Kingdom. The Federal Ministry of Environment and Tourism is the main political partner of the project in BiH.