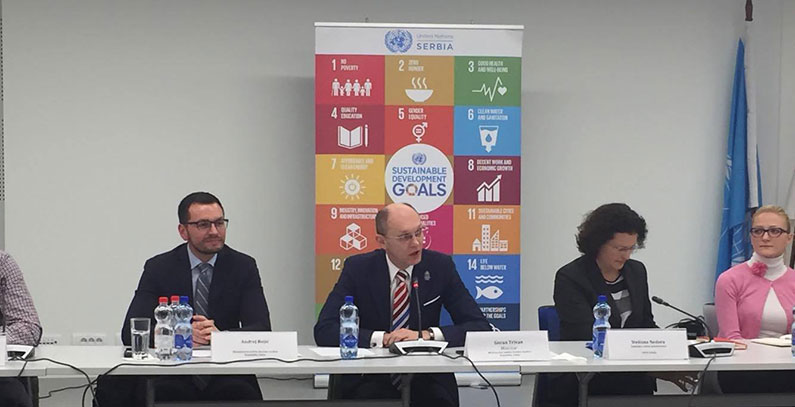 Minister of environment of Serbia Goran Trivan said at the meeting with CSO representatives that sustainable development strategies haven’t yielded any results over the past 40 years and that the issue of environmental safety has become a fundamental issue of security in the world.

At the panel discussion with representatives of civil society, organized by the Ministry on the eve of the Serbian delegation’s departure to Bonn where the UN Conference on Climate Change has been taking place, Trivan emphasized that climate change is the most important global environmental problem and it must be addressed globally.

“There is neither one person nor an institution that could come to the solutions alone,” the minister said. He called on CSOs to cooperate directly with the Ministry in the fight against climate change. He recalled that experts warned about serious effects of climate change on our region.

The first meeting and exchange of views between the government and the civil sector came soon after Trivan recently announced that the newly established Ministry of Environmental Protection would be more open to civil society. He promised that such panel discussions would be commonplace in the future because he wants to communicate directly with people who work to promote a safe and healthy environment.

Closer cooperation with civil society and media is of particular importance in raising public awareness in the fight against climate change, he emphasized.

Trivan announced that the law on climate change will be presented to the Serbian Parliament next year. He also presented the plan of his ministry, which, he said, would focus on afforestation as “the most efficient, simplest and economical way to fight climate change,” since reducing gas emissions alone is not enough.

Very few countries in the world use afforestation in the fight against climate change, and Serbia was no exception, the minister reminded. “At this moment, 27% of the territory of Serbia is forested, and we plan to have about 40% of our territory under the forest by 2040”.

Among the representatives of the civil sector who participated in the panel, among others, were Sonja Licht, president of the Belgrade Fund for Political Excellence, Milan Ružić from Bird Protection and Study Society of Serbia, Branislava Jovičić, president at Center for Promotion of Sustainable Development, Aleksandar Macura from RES Foundation, as well as many representatives of other civil society organizations active in the field of climate change.

Panel discussion of the governmental and civil sector on climate change took place on November 10, and was organized by the Ministry of Environmental Protection with support of the UN Development Program (UNDP).

Deputy Resident Representative of the UNDP Steliana Neder pointed out that, by ratifying the Paris Agreement on Climate Change, Serbia pledged to be one of the countries that will work toward reducing emissions worldwide, and that this is a major environmental step forward.

The Serbian Parliament ratified the Paris Agreement on Climate Change at the end of May 2017.