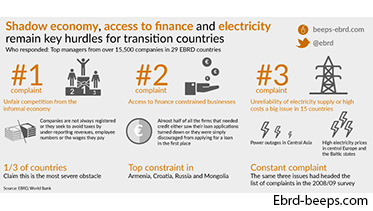 Though some improvements have taken place, electricity issues remained the most severe obstacle for firms in Albania, the European Bank for Reconstruction and Development (EBRD) and the World Bank Group said in the summary of fifth Business Environment and Enterprise Performance Survey (Beeps). The report covers countries in the transition region of Central, Eastern and Southeastern Europe (with Turkey) and Central Asia.

Problems in the electricity sector are in the second place out of 15 categories in Kosovo*, while in Macedonia, Montenegro and Turkey they are the third-biggest challenge for businesses, it was said in Beeps V.

In Kosovo*, small and medium enterprises placed corruption ahead of electricity issues, while electricity issues, access to finance, and crime, theft and disorder topped the list for large firms. Electricity issues were much worse in Kosovo* than in most other transition countries and posed a huge problem in day-to-day business, the report said.

Most of the firms suffered from frequent power outages. In Beeps V, 81% – the highest share among the countries covered – experienced on average 13.6 power outages per month. Despite significant improvement, both indicators were the worst in Southeastern Europe. Firms also bore the highest losses from power outages in SEE – 11.3% of total annual revenue.

In Macedonia, electricity issues, transport and competitors’ practices in the informal sector were most problematic for large firms, while young firms also complained about tax administration. Electricity issues were more pressing than access to finance for old firms, manufacturing companies, and firms in the service sector, EBRD said.

Analysis by the International Monetary Fund points to the inefficiency of electricity use, limited options for electricity supply and aging generation facilities as the main challenges for the country’s electricity sector. The share of revenue lost due to power cuts decreased from 11.8% to 7.5%.

Manufacturing firms in Montenegro found electricity issues to be a more binding constraint than access to finance, ranked second in general. There was a sharp increase in the percentage of firms reporting that an informal payment was expected or requested to obtain an electrical connection: from 2.7% in Beeps IV (conducted 2008–09) to 19.3% in Beeps V.

Problems in the electricity category in Turkey probably ranked high due to the 9.8% rise in electricity prices in early October 2012, in line with the by-then rising global energy costs, with the aim to help support public finances, the report said.